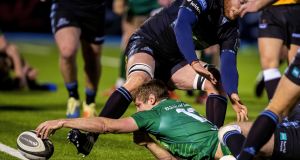 Connacht’s Kyle Godwin reaches over the line for a try that was later disallowed during the Guinness Pro 14 game against Glasgow Warriors at Scotstoun. Photograph: Craig Watson/Inpho

Connacht’s hopes of narrowing the gap on Glasgow Warriors in Conference A of the Guinness Pro 14 suffered a setback at Scotstoun t against a Warriors side that played with ambition to finish winners with a six to three try advantage.

The Irish side were chasing shadows for much of the game and only in the second half did they produce any competent moves, helped by good performances off the bench from backrow Paul Boyle and Peter Robb.

Glasgow made their intentions clear from the kick-off with a try by George Horne after only 45 seconds, the international scrumhalf running a trade-mark support line to take the scoring pass from Kyle Steyn.

Brandon Thomson’s conversion gave Warriors a 7-0 lead but a break by Kieran Marmion took play to the other end, only for Connacht to miss a scoring opportunity with a forward pass, quickly followed by another squandered opportunity, a misdirected goal kick from out half Conor Fitzgerald.

Then when Horne was tackled without the ball, Thomson punished Connacht with a penalty goal. Connacht, however, replied positively, moving the ball from a maul for Tiernan O’Halloran to put Stephen Fitzgerald in for an unconverted try.

Playing pacy rugby, Glasgow were further rewarded for their ambition with a short-range try from secondrow Tim Swinson and the conversion by Thomson.

Just before the break Glasgow struck again with a try from a lineout maul by hooker Grant Stewart, Thomson again on target with his conversion kick. For Connacht there was a double blow with James Cannon being shown the yellow card for taking down the ultimately successful maul.

Connacht had a chance for points on the half -time whistle but again debutant Fitzgerald was off line from the kicking tee to leave his side trailing 24-5 at the break.

Glasgow were quickly into scoring mode in the second half and again it was Stewart, bursting clear from a maul who provided the bonus-point try, Thomson converting with his fifth successful kick.

Centre Kyle Godwin looked to have hit back but sadly for Connacht the centre was adjudged to have lost the ball over the line. Connacht still had the desire to add to their total and got were rewarded with an unconverted try by Boyle.

Almost immediately Glasgow replied with a try by replacement Robbie Nairn converted by Thomson but a converted try by Tom Daly gave Connacht hope of bonus point. That was quickly snuffed out when Nairn sealed his side’s win with his second score of the match.