Ireland U-20s make it three from three with Italian win 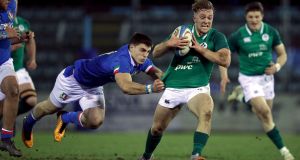 Ireland maintained their winning run in this season’s Under-20 Six Nations with a four try, bonus point victory in Rieti. The visitors’ scores came through a brace of tries from returning scrumhalf Craig Casey and scores from Scott Penny and captain David Hawkshaw. Harry Byrne chipped in with 12-points while replacement outhalf Ben Healy also kicked a conversion.

Noel McNamara’s side thoroughly deserved their victory with halfbacks, the livewire Casey and Byrne injecting tempo and providing intelligent direction to maximise the work of the pack in particular.

The opening 40-minutes was a stop-start affair, referee Craig Evans demonstrating admirable patience in re-setting several scrums rather than adjudicating which team was at fault. When he did decide, Ireland shaded the penalty count 2-1 and were also awarded a free-kick. It proved the genesis for all 17-points in the first half.

In the first instant Ireland elected to take another scrum from a free-kick and it culminated in a sharply taken try for their excellent scrumhalf Casey.

On the second occasion Byrne tagged on a penalty to add to his earlier conversion and then a couple of minutes before the interval, the visitors kicked to the corner from a penalty and several phases later flanker Scott penny grounded the ball against the post for a try. Byrne posted the conversion.

There were one or two worrying moments for Ireland as they initially struggled to defend the powerful Italian lineout maul, twice penalised close to their line, before forcing a crucial turnover, a weakness that materialised again soon after the re-start.

However, with their halfbacks kicking beautifully and varying the point of attack nicely and some strong running from Liam Turner in the centre, Ireland carried the greater threat. Hooker Tierney-Martin and Penny were typically productive and conspicuous in a fine effort from the pack once again.

Casey grabbed his second try and five minutes from time captain Hawkshaw provided the perfect embellishment with Ireland’s fourth. Byrne limped off late-on following what looked like a foot trip that went unpunished.

McNamara was able to empty the bench giving Callum Reid, Billy Scannell, Ronan Watters and Ben Healy their first caps in the process. Ireland’s defensive alignment got bent out of shape from time to time and there were one or two other blemishes but minor cavils in the context of the win. They face the world champions, France in Cork in a fortnight’s time.