Italy have made unbeaten start to their Six Nations campaign 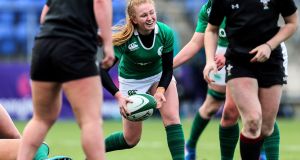 Scrumhalf Kathryn Dane comes into the Ireland side.

Ireland have never lost to Italy in 12 matches in the Women’s Six Nations but their hosts have made an unbeaten start to the tournament, accounting for Scotland in their opening match and then salvaging a draw against Wales last time out.

The Irish team also beat the Scots, having lost their opening fixture to a very strong England side on the opening weekend of the tournament. The progression in performance terms was impressive as Ciara Griffin led her team to a four try, bonus point win last time out.

Scrumhalf Kathryn Dane is the only change from the victory in Scotland while the Italians have promoted Valeria Fedrighi and Gaia Giacomoli to the starting line-up. Italy have managed just 19 points in the last four games between the teams in the tournament but based on their start to the present campaign will be reasonably optimistic they can be more competitive.

No player has carried more ball than Anna Caplice (20) while captain Griffin and Leah Lyons also make the top five in that category. Ireland’s set piece has been excellent, particularly the scrum and they will be hoping that from this platform they can dominate possession, territory and ultimately on the scoreboard.