Munster get over the line against Glasgow 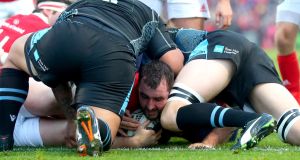 Munster’s hopes of a home semi-final in the Pro12 remain firmly on course after they survived a late rally from a Glasgow Warriors side bidding to keep their season alive.

Rassie Erasmus’ men should have closed out the victory long before Glasgow came with a late surge which threatened to snatch what would have been only their fourth win away to Munster in this competition.

But the Warriors, who bowed out of the Champions Cup to the Saracens side who Munster will play in the semi-finals, were unable to make the most of the late opportunity to take the points.

Now, Gregor Townsend’s reign at Glasgow looks like fizzling out over the next few weeks before he takes charge of the Scottish side.

His men needed a solid start to thwart a Munster side buzzing after their demolition job over Toulouse last weekend, but Glasgow never looked like taking charge and found themselves 7-0 down after just six minutes after failing to clear their lines.

Their efforts to alleviate the danger after a five-metre scrum on their own put-in were thwarted when outhalf Tyler Bleyendaal was instrumental in executing a superb turnover and after piling on the pressure, loosehead James Cronin squeezed over.

Bleyendaal added the conversion but shortly afterwards had to go off after getting a knock to the head.

Stuart Hogg got Glasgow moving and it took a good tackle from Munster full-back Andrew Conway to deny Lee Jones down the right wing at the end of the opening quarter.

The bounce of the ball was all that stopped Munster increasing their lead in the first attack of the second-half but Darren Sweetnam’s chip hopped away from Conway with a clear run to the line.

Glasgow struggled to clear their lines and while Rory Scannell was stopped short, television match official Neil Hennessy spotted that Jack O’Donoghue did not return to his feet before touching down and the danger was cleared by the Scots.

Glasgow knew that their season was on the line in the final half hour and they valiantly tried to go wide in an effort to open a Munster rearguard which was rock solid.

The game was regularly stopped as referee Nigel Owens consulted with the TMO, with Munster scrumhalf Duncan Williams being pinged for a neck roll after a good break by Conway had set up a promising position for Munster.

The capacity home support of 8,008 at Musgrave Park produced one of the biggest cheers of the night when Donnacha Ryan, bound for Racing 92 in the summer, was introduced for what is likely to be his final action in a red jersey in Cork.

Munster were sure they had wrapped up the game after 57 minutes when Williams and Jaco Taute combined to send top try scorer Ronan O’Mahony away to the line but a combined tackle from Tommy Seymour and Ali Price did enough to ensure the winger was not in control of the ball as he tried to touch down and the score was disallowed after another intervention from TMO Hennessy.

The reprieve was short-lived for Glasgow as Munster, largely through the efforts of the excellent flanker Conor Oliver, won a penalty on the Warriors’ put-in on the five-metre scrum and Rory Scannell made no mistake with the penalty from the left.

That pushed Munster 10-0 in front going into the final quarter, leaving Glasgow with an uphill battle to salvage their season.

They were given a lifeline 11 minutes from time when a chip from Hogg bounced unkindly for Conway and the Warriors full-back collected to score, with Finn Russell converting and suddenly it was 10-7 but that was as close as Warriors got to getting the win.