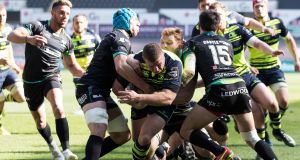 Ross Byrne was the Leinster hero after his drop-goal sealed a dramatic 20-18 triumph over the Ospreys at the Liberty Stadium on Saturday to keep Leinster in command of the Guinness Pro12.

But it all could have turned out so differently if Dan Biggar had not sent an overtime penalty wide of the uprights.

The visitors took time to overcome their European hangover as Sam Davies crossed in the corner to put the Ospreys in charge. But Sean Cronin, making his first start since January, stunned the Liberty Stadium into silence when he showed wingers’ pace to score before Dan Leavy crossed after the interval.

Justin Tipuric edged the Ospreys in-front with a close range score only for Byrne to nail a late drop-goal and Biggar’s last ditch penalty drifted wide.

“I thought we’d blown it, I was 75 per cent sure that Dan Biggar was going to kick that last penalty,” Leinster head coach Leo Cullen said afterwards. “It was a draining game and it looked a tired kick, so maybe the game had taken its toll.

“I thought we were off the pace at the start of the game, we knew the Ospreys would come hard at us, we prepped for it but couldn’t defend it. We did well to battle back into the game and Sean Cronin took his try really well, but it was a mixed bag.

“But Ross Byrne showed great composure to kick the drop-goal at the end, he made a good contact.”

The Ospreys could only boast a single victory in five years against the men in blue, but they got off to the perfect start in their bid to end their Leinster hoodoo. Biggar, on his 200th Ospreys appearance, hit the post with a long-range penalty and the visitors managed to clear.

Rory Thornton claimed the resulting lineout before Josh Matevesi burst through the defensive line. He worked it to Olly Cracknell before the ball was passed through the hands to Davies, who scored in the corner.

Biggar was off-target with his conversion but made amends moments later to take them 8-0 clear.

Leinster had met stern resistance from the Ospreys defence, before an unlikely source lit-up the Liberty Stadium after 24 minutes. The ball was spread wide to Zane Kirchner, who sucked in two defenders and fed the ball to Cronin on the wing.

The 105kg hooker turned on the gas to race around Biggar and score, with Nacewa converting to cut the lead to a single point.

Nacewa then added a penalty five minutes before half-time but Biggar replied to give the Ospreys an 11-10 lead at the break.

But the hosts’ lead did not last long. Cronin was at the heart of the action again with a strong carry to get Leinster to within two metres of the Ospreys’ line. The defence looked to be holding firm, but half-time replacement Leavy found an inch of space to burrow over and score. Nacewa added the extras to give Leinster a 17-11 lead after 45 minutes.

Leinster had the chance to put themselves two scores clear with a kickable penalty, but instead chose to go to the corner and wasted the chance. And they were made to pay after Davies sent a perfectly weighted penalty kick to touch.

Webb sniped to within inches of the post, before Tipuric wrestled his way over to give Davies an easy conversion to put the Ospreys back in charge.

Cullen’s men looked to be building towards a drop-goal to win it in the late stages, but Robbie Henshaw, who had impressed all afternoon, threw a wild pass into touch to dent their hopes.

However, they came again as the clock ticked into the 79th minute, and this time the ball was given to Byrne, whose drop-goal crept over the bar.

He could have gone from hero to zero when he left a high-tackle on Dan Evans after the restart. But he breathed a sigh of relief when Biggar’s penalty drifted wide to hand Leinster a 20-18 victory.

“It’s a pretty devastated changing room after coming off on the wrong side of the scoreboard again,” said the Ospreys head coach Steve Tandy.