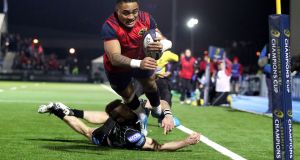 Munster’s Francis Saili scores a try against Glasgow earlier this season. He returns at centre for this game. Photograph: Dan Sheridan/Inpho

This should be good. Familiarity tends to breed an edge and facing into their fourth meeting in six months, there will probably be enough needle in this to fill a haystack.

That Munster have won all three previous collisions, including a pool double in the European Champions Cup, ought to give the Warriors every incentive. Unlike Munster, their European Cup campaign ended last weekend with a thumping defeat against Saracens and although that must have been demoralising for them, Gregor Towsend has picked a strong team, and a match-day 23 which boasts over 1,500 appearance for the region.

Although assured of their place in next season’s Champions Cup, Glasgow trail the top four by ten points going into the week and are without an away win in the league since the turn of the year. Hence they are in must-win territory if they are to retain their faint hopes of a place in the play-offs and a chance at regaining the title they won so impressively against Munster in the final in Belfast two seasons ago. Otherwise, Townsend’s last season with them is in danger of petering out anti-climactically.

Munster, who have won 18 of their last 20 matches – the only blemishes being away to Leicester and at home to Scarlets – went into the weekend in second place and two points behind Leinster but just four clear of the Ospreys in the chase to secure a home semi-final and ten clear of the Scarlets in fifth place.

After this, only their fourth game in Cork this season, Munster host Ulster and Connacht in provincial derbies either side of a trek to Treviso.

Not surprisingly, with Munster still competitive on both fronts, Rassie Erasmus has rotated his squad in making ten changes.

On loan signing Jean Deysel is in line for his debut and is joined in the backrow by Jack O’Donoghue and academy flanker Conor Oliver. Francis Saili starts alongside Jaco Taute for the first time in a Springbok-All Blacks midfield alliance while the league’s leading try Ronan O’Mahony, and fullback Andrew Conway return to the back three.

Erasmus has picked a match-day squad which has 1,472 caps for the province, with five Ireland internationals in reserve. If they’re still in the hunt entering the last quarter, that could swing things their way.