While not behemoth they once were, under Erasmus province have rediscovered old threat 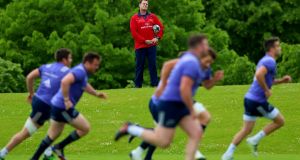 Director of rugby Rassie Erasmus casts an eye on Munster training at the University of Limerick. Photograph: James Crombie/Inpho

Limerick was resplendent as the sun shot across the threadbare running track by the Munster corner of the university.

Upstairs whoops and hollering of players cut across the still campus. The odd stray teenager cradling a stack of books drew a picture of tapering down.

May time in college, the time of year when players and students alike hold themselves up to examination.

In the weights room on the first floor, the slamming of steel and shrieks of exertion would not have been heard this time last year as Munster finished their season on May 7th. Their race run.

The players, today diligently going through their routines of squats and bench presses, would have disappeared with just the odd straggler and the administration staff planning ahead for this season, hoping that one place off Munster’s worst ever finish in the league could be turned around.

But the last 12 months have been transformative in a way that few saw coming. From sixth in last year’s Pro12 league table to first this season, a semi-final today and who knows.

Even before Steve Tandy and his Ospreys team arrive there is a glow of energy around, promise in the air and maybe too a sense of fulfilment that the players’ belief in themselves and their coaching staff has brought them to the brink.

The great bleak backdrop to it all is Rassie Erasmus picking through the remnants of a shattered squad after the heartbreaking death of Anthony Foley and directing the energy of grief and belonging in a way that made them tick.

The players found commitment to an unwanted cause, to a memory and a big personality. They looked towards each other and turned a team with a sprinkling of star turns into the top performers in the championship.

It would have drawn Foley’s approval.

“Yeah it’s really amazing to think . . .” says Andrew Conway. “The difference where we are . . . I think a few things went wrong last year that we’ve got right this year. Maybe an element of luck. There’s obviously been the tragic death of Axel that seemed to galvanise everyone, the players, supporters, the club. It brought a new energy in a weird, obviously sad sense.

“I didn’t play in the Glasgow game after Axel passed. You just want to be involved in stuff like that, games where there are 26,000 people going mad, games where you can see your mates and your team-mates would do anything to win.”

In the Champions Cup last year, Pool 4 turned out to be too deep for the team to emerge from, with three matches lost from six sinking Munster into third place and out of a competition they once owned.

By February 2016, with declining attendances and the province set to post losses of €2.5 million, Foley was pressed into talking down reports of a crisis.

Still, Munster can look to their final match and maybe even see it as the beginning of this season more than the end of last.

It was against Scarlets and the team secured their place in this year’s Champions Cup, a tough hard fought win at Thomond Park, a defiant end.

The door opens. In springs CJ Stander on his toes, gripping and ripping every hand in the room. Eye contact all round. An upbeat, agreeable energy seeps from him. Without trying, without perhaps knowing what it is, the South African’s heart and rampaging brand has come to embody Munster simplicity, its strength and purpose.

Speaking as he sometimes does in a series of short phrases strung together, candour and unity has been part of this season’s bargain.

“The way we play . . . the way we want to, it is to go out and express ourselves,” says Stander. “Try and take the pressure from ourselves, just go out there and perform. Say Saracens . . . we were in it but we still had a lot of pressure on ourselves. Just go out and play as we can play, like we did from the beginning of the year. We just want to go out there and enjoy ourselves and play the way we want to play. If we make a mistake, it’s fine, just as long as it’s not [lack of] effort mistakes.”

Errors have been one of the areas the players have spoken of, an area where Erasmus has empowered them. He has encouraged his players to forget mistakes if they happen. He has given them a licence to play and if it does not come off the motive becomes a determination to get the next one right and not dwell on the one that did not work.

“There is no point thinking about the last thing that has gone negative, because you have however long left in the game to have a few positive impacts,” says Conway.

“So, just driving that . . . because maybe playing in years gone by you’d make a mistake and think ‘oh geez’, that might cost me and then ‘oh, I might stay out of this one.’ Not that you stay out, it’s just now you throw yourself in there.

“It’s almost like you go ‘grand, that is a mistake, I’m going hard into the next thing.’ It’s just a great way to think of it. For me I’ll keep writing that down for games, writing getting [involved in] battles, getting battles, getting battles. That doesn’t mean that they are all going to go great. It doesn’t mean you’re going to play great every time.

“But it is just a great cue to have, to be able to just leave that as long as it is not an effort error. If it’s a skill error it doesn’t matter. If it is an effort error they are going to rip your head off. But if it is a skill error under pressure, that’s fine, just crack on to the next one.

“I think with him [Erasmus] and Jacques [Nienaber, defence coach] and then Felix [Jones, technical coach] and Jerry [Flannery, scrum coach], they have really driven that. I think that has been my main psyche switch if that is the right [way to explain it].”

The European semi-final a few weeks ago against Saracens flattened out the Munster rise. Without Conor Murray they were an lesser side but Erasmus is true to his philosophy. He can, he says, “moan” about things. But where is the value?

Saracens’ way of playing taught him something new and if he stays with the province, that intelligence will be passed on.

“I must be honest with you,” says the coach. “Out of the last couple of years, they were the matches where I’ve learned the most, matches like that.

“Not about the wild things, and the obvious things everybody sees. But the things you see and analyse and then still you couldn’t do something about them on the Saturday.

“It took them eight or nine years. I’ve coached a lot of those players, Schalk Brits, Schalk Burger, Michael Rhodes, Vincent Koch, Neil De Kock, worked with a lot of those guys for years and for them [Saracens] to coach them the things they’re doing currently, it gives you hope.”

The Erasmus way has particularly worked with the younger players but the Scannells, Rory and Niall, Conway and Darren Sweetnam have taken bigger loads and several have earned a place on Joe Schmidt’s summer touring side.

“Definitely. Anyone will tell you when a new coach comes in that everyone is a bit on eggshells, trying to impress, trying to get a good first impression going,” says Conway.

But eventually you get a chance and I think you see with what he is doing with the young lads, like a Conor Oliver, Alex Wootton and Dan Goggin, the list goes on.

“They are all progressing as the year goes on, whereas last year, even a few months ago you were going who is coming up in that position? Now there is a conveyor belt of people that aren’t just coming up, that are competing better.

“Conor Oliver in my opinion has been one of our best players all season. He is competing with two Lions-to-be, Irish internationals, so it is not an easy place but he is playing unbelievably well. Whenever lads get opportunities now they are not scared of the opportunity, they are embracing it and flying into it.”

Around the university and the Munster training paddocks, the team have been hitting their grades.

“It has been a massive swing,” says Conway.