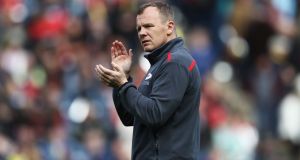 Mark McCall’s Saracens are in pursuit of a third English Premiership in a row. Photograph: Getty Images

When Mark McCall agreed to join Saracens in 2009, Brendan Venter had a word of advice for his new first-team coach. “Smally, you’re going to have to buckle up because it’s going be a hell of ride,” he said.

The rest of the conversation is harder to recollect for Venter, who chuckles as he recalls the killer line, but Edward Griffiths, chief executive at the time, remembers well his first encounter with McCall, in a cafe in St Albans. The three of them – Venter, McCall and Griffiths – the three pillars of Saracens success, setting the wheels in motion towards becoming back-to-back European champions.

“Brendan came in and we were looking at ways of running the club, a whole new culture. He wanted somebody he could emphatically trust,” says Griffiths. “When we appointed Mark as an assistant to Brendan in 2009, we knew we were appointing someone who would be equipped to take over when Brendan left [as director of rugby in 2011].”

McCall, of course, is the only one who remains, yet little is known about him. The Northern Irishman eschews the limelight, is quietly spoken and seems almost allergic to praise. At times his assistants – Andy Farrell and Paul Gustard spring to mind – have been more heralded. So what is it that makes him tick?

“Andy Farrell and myself are extrovert leaders, we talk and use our hands. But one is not better than the other. Both have strengths and weaknesses and the trick of knowing what they are is more the issue.

“Mark does not crave attention and that is why everybody likes him. He’s not a self-centred individual who wants more for himself. He has no desire to be in the newspaper. I think the players and his coaches know that and like that. He’s really good at what he does but he doesn’t need to tell other people that.”

Griffiths has a similar opinion of the man who played his part in three Premiership titles and two European triumphs. “He doesn’t speak unless it’s necessary to speak but as a result, when he does speak he speaks with great clarity.

“Once upon a time, head coaches were people who screamed and shouted and hollered at players but Mark doesn’t do that. I think a modern rugby player responds more to the quiet, considered, logical and highly technical coach, rather than the old-school screamer and shouter.”

Back to that St Albans cafe and the first problem identified for Saracens was a lack of continuity. Other clubs winning the Premiership had more than 15 players with upwards of 100 appearances, Saracens had star names but on the whole were a revolving door. To resolve the problem, the individual was to come first.

As Griffiths says, “we had a simple principle that you treat people unbelievably well and in return they try unbelievably hard”, while Venter puts it a slightly different way – “that we make every day a good day” – and McCall has continued in the same vein.

Venter introduced a culture of no fear, Griffiths the brains behind the now famous bonding trips abroad. Add in a greater focus on an academy that has since produced Owen Farrell, Jamie George, George Kruis and Maro Itoje, to name just four, and the picture becomes clearer.

“They are all very valuable people and Mark makes them work together, that’s the skill,” says Venter.

“Billy Vunipola, Mako, Owen, Maro, Jamie, George, Schalk Brits, Schalk Burger, are all amazing people. It’s the person that makes them work together and that’s why I think Mark is such a good coach and has such amazing success.”

Needless to say, all of the above is made considerably easier when bankrolled by Nigel Wray’s millions. It is the obvious counterpoint brought up to the success story but perhaps the biggest compliment that could be paid to McCall is that Saracens these days are less the team everyone loves to hate, more the team that everyone cannot help but respect.

After defeating Clermont on Saturday, it came as little surprise to hear McCall talk of future success – having already achieved their second consecutive European title, Saracens are two wins away from a third successive Premiership, starting with Exeter away on Saturday.

The sky would appear to be the limit for this side but Griffiths sounds a note of caution. “The major challenge will be to keep this squad together after the 2019 World Cup because the salaries top players are earning has gone up dramatically over the last few years.

“But if the core of the squad is retained then there’s no reason why the club should not continue to enjoy the same level of success.”

Holding on to McCall – who is contracted until 2019 – would certainly help too. “I’m sure he won’t be short of offers if he chooses to go down the international route,” says Griffiths.

Venter, however, does not expect McCall to pursue a role with Ireland or any other nation and while talk of dynasties is banned at the club, the former director of rugby is more than happy to do so.

“I would advise him as his friend not to do that at all. Mark has different reasons for doing things. It’s not about Mark, which is why I don’t think he’ll take an international job because it’s not what he wants to do,” says Venter.

“Mark and I spoke before the final last year about the team and I said: ‘Smally, my message to them would be this is not the pinnacle of what we’ve worked for. This is the beginning. We’re going to build a dynasty like they’ve never seen in rugby before.

“Saracens are just in a good place because they do the little things right, it’s as simple as that.’”

It would seem the ride is far from over.