Munster and Conor Murray are fresh and ready for Ospreys 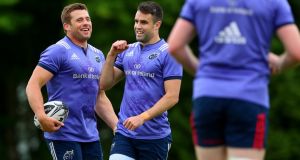 CJ Stander and Conor Murray during Munster training ahead of their Pro12 semi-final clash with Ospreys. Photo: James Crombie/Inpho

There is usually a silver lining when a coach is asked about the health of his squad and begins the answer by saying; “It is very good, and probably if I say anything I’d be looking for something to moan about . . .”

Full disclosure from Rassie Erasmus. After a two-week break, his fresh Munster players are giddy on summer grass and kicking up with outhalf Tyler Bleyendaal and scrumhalf Conor Murray keen to stretch their legs.

But coaches are as coaches be and the canny South African knows that healthy is only the first step towards form.

There is a small crease in his smooth veneer of satisfaction and that is how Murray will perform after his stretch on the sidelines.

He will train and will be prepped to face his Lions competition Rhys Webb when Munster take on Ospreys on Saturday. But Murray comes into the match having played just over 20 minutes two weeks ago against Connacht.

He suffered a stinger injury to his shoulder in Ireland’s defeat against Wales during the Six Nations Championship in March and failed a fitness test to face England in the St Patrick’s weekend finale in Dublin.

“He came through well,” says Erasmus. “I think any player in the world . . . even take CJ (Stander), who was out for a few weeks. He didn’t immediately fire in the next game and play unbelievable, smashing people all over.

“Look at Peter O’Mahony when he came back after his knee. It took a while and now he’s back into the Lions team.

“Conor will be the same. What you always understand is that nobody is Superman, where you stay out for nine weeks and just fall back into the same form. He’s definitely injury-free at this stage but match sharpness would be, like with anyone else, a bit of a problem.”

Ospreys lock and Lions’ captain Alun Wyn Jones is also in a battle and his chances of boarding the plane for New Zealand were in doubt following the shoulder injury he picked up in the dramatic Six Nations finale against France in Paris.

The Wales captain and talisman for the Ospreys was initially given six weeks before a medical review but is now hoping to face Munster in the semi-final.

Like Murray, form not health could be his enemy.

“If you’re looking for a negative, you’ll probably say that I don’t think everybody is match fit. But if you look at all the other teams, they must have positions like that.

“Alun Wyn . . . (Dan) Biggar went off the previous game with an injury at half time. I’m sure every coach is sitting with that problem. It’s not a complaint.”

An added narrative is that Murray will face Webb. The two will spend the first seven Lions’ matches competing for the starting place before the three Test matches against New Zealand at the end of the tour.

Murray may have been voted Irish Rugby Players Player of the year last week but, as Brian O’Driscoll understands after being dropped by Warren Gatland for the final Test against Australia in 2013, the Wales coach does not do emotional picks.

Still a duel in Thomond Park for the first of the bragging rights of what will be a long tour may be an inevitable sub plot to the semi-final. Or maybe not.

“I don’t think it would be a distraction,” says Erasmus. “I don’t see Rhys as that kind of player either.

“They will be competing but they’re experienced and old enough to know that . . . if you get selected for the Lions you’re sharp enough to know that, ‘If I’m going to make this a personal battle, I’ll be the one to lose out because my team will be losing, I might stand out as having a terrible game.’

“Even if he (Murray) plays in the Lions squad and doesn’t make the team, he’d support Rhys. That’s the kind of guy he is.”

The coach points out that both players, as well as Rory Scannell at pivot, helped get Munster where they now are and should not be slighted.

The semi-final defeat to Saracens, he says again, was not because Williams was playing but because of his coaching and the lack of maturity of the Munster team.

Still Murray is Murray. His rise in stature over the last couple of years ensures he’s a player Munster will look to, even when he is lacking game time.

“If you make the Lions squad and you’re rated as one of the best nines in the world, you would be stupid not to give the guy . . . He’s 100 per cent fit but he’s just not 100 per cent match sharp. Hopefully he is Superman and he comes good on Saturday. So we will pick him.”

The caped crusader. Quite a silver lining.