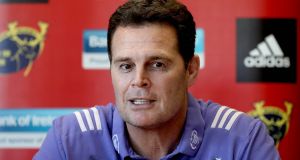 Munster coach Rassie Erasmus says he has no plans to make any additions to his management team in the off-season.

Erasmus was brought to the province last season in a director of rugby role, but since the untimely death of his head coach Anthony Foley, he and the rest of his coaching team have taken on extra duties.

Scrum coach Jerry Flannery, skills coach Felix Jones and defence coach Jacques Nienaber have all shouldered extra responsibilities along with Erasmus, and the former Springbok says they have all coped admirably in difficult circumstances – so much so he wants to keep the same team together for next season.

“I think we have four guys that’s doing the job. So, no, I don’t think in the near future [we’ll make any changes],” said Erasmus.

“Jerry took on the lineouts and scrummaging and forward play overall. Felix, he started out as just the skills fundamental coach. Now he’s now full on the backline, attack, skills coach, and he’s doing the kicking and the highball catching.

“Jacques is doing defence and exits and those kind of things. Myself, I’m helping out at the breakdown and mauling. Between the four or us, we are managing.

“We are fairly comfortable with each other right now. We went through some tough times and good times together. This weekend was a tough time and on Sunday night the boys were back at it.”

After their 26-10 defeat to Saracens in last Saturday’s Champions Cup semi-final, Erasmus conceded that his side were beaten by the better team, and that even if they were at their best they may not have been able to beat the defending champions.

The general view since the game has been that Munster lacked a cutting edge in attack and kicked possession away too often. While agreeing that they need to improve in attack, Erasmus defended his side’s tactics.

“It is something that got us to a semi-final,” said Erasmus. “And last year we had Zebre in the pool and we didn’t get out of the pool. I guess if it isn’t the best tactics, it’s at least a little bit better than it was last year.

“I’m not sure if it is not easier to say afterwards, we went in with that tactics and we didn’t get the score. So obviously it wasn’t the best tactics, there must have been something else we could have done.

“We had a lot of territory and a lot of possession in the first-half. That’s the top level, the highest level, and they kept us out. There are various reasons for that, I can go into tactical or technical reasons for that; but at the end of the day, their defence was better than our attack.

“We have to work on that attack and calmness. Test-match level is like that, although I think at Super Rugby level Saracens is probably one of the toughest – if not the toughest – I have been involved with. It seems like all 23 players can tackle. There’s not a weak defender.”

Two points from Saturday’s trip to Treviso will guarantee Munster a home semi-final in the Pro12, but they will again be without Conor Murray, who is still recovering from a shoulder injury. Despite limping through the closing stages last weekend, CJ Stander was fit to train in Limerick on Tuesday, although the rested Peter O’Mahony, Dave Kilcoyne, John Ryan, Andrew Conway, Niall Scannell and Tommy O’Donnell will not travel to Italy.

News that Erasmus will remain at the province next season has been welcomed at Munster, and he says he is happy to now draw a line under the speculation.

“I told the players seven or eight weeks ago, ‘boys, you are not going to hear a definite ‘no’ from me in the newspapers because one day I would like to coach the Springboks, if I am good enough and the opportunity is there and if it fits in with everything and everything works’.

“I wouldn’t like to close the door there. Really if I’m good enough and the opportunity is there, I would.

“It has always been the case, the moment anything changes I will come and sit here and say ‘guys, listen there is something there’. I wouldn’t be speculating about those things. So, yes, I’m glad, I’m glad.”