The Lions squad to tour New Zealand this summer will be without England captain Dylan Hartley as Welsh flanker Sam Warburton will captain the side during the tour for the second time in his career. 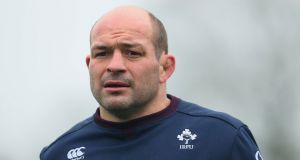 Rory Best has been named in the Lions squad to tour New Zealand this summer. Photo: Brian Lawless/PA Wire

A total of 11 Irish players have been named in the Lions squad for this summer’s tour of New Zealand with Ireland captain Rory Best beating his England counterpart Dylan Hartley to to a place.

The entire Irish frontrow of Jack McGrath, Rory Best and Tadhg Furlong were also included while Iain Henderson and Jared Payne were also rewarded with spots on the plane.

Hartley is the third successive England captain to miss out, following in the footsteps of Chris Robshaw and Steve Borthwick, but the Six Nations champions still supply the largest contingent, numbering 16 players.

After England’s 16 players, Wales have the second most with 12 then Ireland with 11 and, finally, Stuart Hogg and Tommy Seymour from Scotland.

Head coach Warren Gatland has selected a 41-man squad for the 10 fixtures culminating in a three-Test series against New Zealand, including surprise call-ups for Payne, England wing Jack Nowell and Wales back row Ross Moriarty.

Despite reports of his inclusion, there was no place for two-time tourist Jamie Roberts but Jonathan Joseph has made the cut as one of the centres.

Wales backrow forward Sam Warburton will captain the tourists for the summer series.

Warburton, who has won 74 Wales caps and led his country in two World Cup campaigns, is currently injured. He suffered a medial knee ligament strain during the Blues’ Guinness Pro12 clash against Ulster earlier this month, but is only expected to be sidelined for up to six weeks.

He could even return to action for Cardiff before the Lions depart to New Zealand on May 29th, if they reach the European Champions Cup qualification play-offs.

Reflecting on the appointment, Gatland said: “Sam is a great player, an outstanding leader and a winning Lions captain.

“We believe that Sam’s experience and leadership qualities make him an obvious choice as captain.

“He has earned the respect of his peers and coaches through his resilience, tenacity and hard work.”

On the eve of the announcement, Warburton attended a private dinner with all the living Lions captains in the Hilton Syon Park Hotel, near Twickenham.

Warburton added: “Being in the same room as so many Lions legends was an amazing experience.

“I feel humbled and extremely proud to be given the opportunity to captain the Lions for a second tour, and look forward to playing the world champions on their own turf with the best players of the UK and Ireland at my side.”

Gatland is taking four more players than 2013 when Australia were swept aside 2-1, his total number of tourists only three short of the record high registered on the last occasion when the Lions toured New Zealand in 2005. There are two survivors from 2009 — Alun Wyn Jones and Leigh Halfpenny — and 16 from four years ago.

“There’s been healthy debate about the squad and now that it’s been announced we need to get it behind it 100 per cent and get excited about travelling to New Zealand,” Gatland said.

“There’s competition for places and there will be players fighting for Test spots with no clear number one, number two or number three in certain positions.

“That’s what makes us pretty excited about the quality of the squad going to New Zealand. But we know how tough it will be — this is the toughest tour.

“In previous tours the midweek games tended to be a little easier, but when you look at the quality of the opposition we’re facing in midweek, it’s going to be hugely challenging.

“That’s why we’ve taken a few extra players than we did in 2013. We just needed to make sure we have the depth and quality in the squad to make sure we can handle the quality of the sides we’re coming up against.”

British and Irish Lions squad for tour of New Zealand:

1 Few, if any, have given as much to Munster as Garrett Fitzgerald
2 On healing and wild hurling: The re-education of Diarmuid Lyng
3 Wexford best the weather and Kilkenny on a mad day to be hurling
4 ‘Your father works for my father’: Schools rugby turning toxic in the stands
5 Jimmy Greaves: A working-class hero who defined a generation
Real news has value SUBSCRIBE