Leinster emerge from the RDS darkness to pip Glasgow

Despite a late floodlight failure, Leo Cullen’s side held on to remain top of the Pro12 table

Floodlights failed at the RDS during Leinster's Pro 12 win over Glasgow on Friday night. Illumination was provided by IPhones and the big screen until the backup generator kicked in. Video: David Dunne 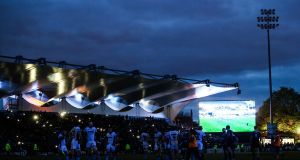 Darkness in the RDS after the floodlights failed during Leinster’s Pro12 win over Glasgow. Photo: Tommy Dickson/Inpho

There was 78.26 on the clock when the floodlights failed.

“Ladies and gentlemen we are just waiting for back-up power,” the stadium voice reliably informed us. “Please remain seated and we’ll have instructions for you shortly.”

The RDS was illuminated by iPhones and the big screens at either end.

An engineer got to work and, at 9.41pm, the generator kicked in.

Glasgow attacked. Jack McGrath eventually came up with the ball but his kick never made the touchline. McGrath’s blushes were saved by Adam Byrne gathering the bounce and stepping out of play.

Quick note about the game: Joey Carbery arrived late on to kick the winning penalty.

That ensured the wheel keeps on turning although afterwards Leinster stalled, albeit momentarily, to wish the departing men well.

This night ended with Mike Ross taking leave of the RDS one last time.

The 61 times capped tighthead prop got a standing ovation on 53 minutes in recognition of his circuitous career. Once upon a time Ross was a respected Cork Con prop, a civilian, until Harlequins came for him in 2006, long before Munster looked or cared about someone lightening the load heaped on John ‘Bull’ Hayes.

Ross never garnered any lasting nickname yet his body of work remains as important as anyone in possession of two European and two Six Nations medals.

As usual the 37-year-old trundled about the place and scrummed like an ox, like he’s done in blue more often than not these past eight seasons.

The crowd paid him his dues before he disappears into the tech world.

Presumably, that’s it. Michael Bent will cover Tadhg Furlong until the hugely promising Andrew Porter is ready to pack down at tighthead.

It was a less romantic ending for another taking leave of the club.

Dominic Ryan followed the programmed line of running to gratefully receive Dragons bound Zane Kirchner’s offload after Ross Byrne reversed the attack with just seven minutes played. Seconds later Ryan’s seven years at his home province, which gained him entry to the one cap club, looked over due to a damaged left wrist.

The newly contracted Peader Timmins entered the fray as the system rumbled on.

Glasgow’s initial disinterest helped. No Stuart Hogg in their squad as Tommy Seymour – the other Scottish Lion – took up residence at fullback while Finn Russell was held in reserve.

More from Russell further down this report.

Ross Byrne wanted to keep his name in the ring, or more importantly keep Carbery in the back field. That didn’t work out so well. Despite shipping an early knock himself, Byrne battled away with a trademark cross field punt that ricocheted neatly for Rory O’Loughlin to race clear.

Peter Horne penalties kept tabs on the relentless Leinster assaults that all but secured the result when a 20 metre maul humiliated Jonny Gray’s Warriors. Up came Peter Dooley from the mass of bodies.

Just over half an hour played and a 20-6 lead was constructed. Byrne missed two conversions.

The departing Gregor Townsend – moving upstairs to become Scottish coach – realised the Leinster seconds were about to wipe his team off the park. So, on 36 minutes, he introduced regular starters Zager Ferguson and Rob Harley as Sila Puafisi and Brian Alainu’uese suffered the ignominy of the early Shepherd’s Crook.

Byrne brought his kicking return up to 60 per cent with a touchline penalty on the stoke of half-time.

But vestiges of pride still exist in the Glasgow ranks. Adam Ashe squeezed over for a try early in the second half.

Still, they needed 15 men to have any chance of a revival. Tom Daly had a wobble in the second minute but returned after passing the Head Injury Assessment. But a no arms tackle on him by Leonardo Sarto, 48 minutes later, meant no amount of chit chat in Italian was going to save him Marius Mitrea wielding his yellow card.

Kirchner also bid adieu to Dublin with a try on the hour mark that Byrne, again, flashed past the uprights.

At 28-16 a rout was promised. Not so. Russell came off the bench to threaten Leinster’s two year unbeaten record at home. First, Lee Jones stepped inside Ross Byrne before Russell wriggled his way to the line with ten minutes remaining.

Suddenly, without much warning, we had a game.

No panic. Not with Carbery on the field. The young star arrived to make it all look so easy, kicking the winning penalty as Leinster clung on.

Then darkness. Then iPhones lit the place up. Then Jack’s kick and Adam’s intervention.

No panic at all.

Wilson Kipsang arrested for breaking coronavirus curfew with bar lock-in 12:52
New Zealand cricketers unlikely to visit Ireland in June 10:45
Uefa say cancelling domestic leagues should be a ‘last resort’ 10:38
Sport will be the last duck in the row, Shelbourne’s triumphant return 07:54
Greener Pastures: Seinäjoki feels most like home for Tommy Dunne 06:30
Here is your handy guide to sport on television this week