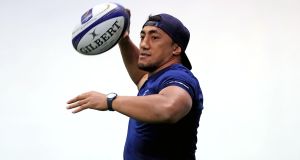 Connacht head coach Pat Lam has made four personnel changes to his side ahead of Friday’s Pro12 clash with Ulster at Kingspan Stadium .

Bundee Aki will undergo surgery this week for an ongoing ankle injury and will return in mid-February. In the absence of recognised midfielders, last week’s try scorer Danie Poolman will start at inside centre for the first time alongside Rory Parata.

With Conor Carey added to the long list of injured props, the versatile Tom McCartney has now been named on the bench to cover loosehead prop. Dave Heffernan with start the game in the number two shirt while Shane Delahunt is named on the bench as replacement hooker.

James Cannon comes in to the side to partner Quinn Roux in the second row while Galway man Sean O’Brien is promoted from the bench to join the back row with Nepia Fox-Matamua and captain John Muldoon.

There remains a 6-2 split on the bench with just nine backs available to Lam and his coaching team. Academy back Ciaran Gaffney is this week named in his first match day squad. The 21-year-old from Galway made 10 appearances, including nine starts, for the Ireland Under-20’s between the 2014 Under-20 World Championship and the 2015 Under-20 Six Nations.

“This week has probably been the most challenging I’ve had at Connacht Rugby with all the injuries, sickness and the group only coming together yesterday. Losing both Bundee (Aki) and Conor (Carey) to long term injuries is a big blow especially with our injury crisis at prop and midfield. With 21 injuries in our squad it’s an opportunity for the next player still standing to come in and nail his role in our structures and systems.

“With the named squad not even training once together this week, there has been a huge emphasis once again on the classroom learning and mental preparation. I was really proud of the boys with the work they put in last week and the character they showed in adversity to grind out a big win. We’ll be looking for the same again this Friday night, albeit in a much tougher environment at a sold out Kingspan Stadium and against a quality side like Ulster.

“We know we don’t have a good record up in Belfast but that just means this is a huge opportunity for us to create something special as a group. We’re really looking forward to the challenge.”

Pauw: Delay in Ireland’s Covid-19 test results compared to Germany is ‘unfair’ 12:55
Full 36-player panels to be allowed at intercounty matches under Level 3 12:46
Women’s Rugby World Cup to be expanded to 16 teams from 2025 12:03
Joe Canning discharged from hospital on Sunday night 11:45
Defence dominated Nations Cup has failed to lift spirits 11:09
Here is your handy guide to sport on television this week