Ross Byrne relishing his role in limelight with Leinster 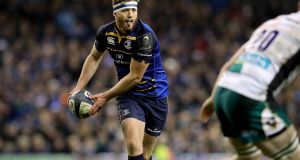 Leinster outhalf Ross Byrne: “Ultimately you want to be the number one 10 in Leinster. You want to play in these big games.” Photograph: Ryan Byrne/Inpho

Ross Byrne chuckles at the proposition Leinster have classified him as something of an endangered species, a precious cargo.

The last man standing with a number 10 shirt is taking it all in his stride. It is, he believes, an opportunity.

A quick reprise of the current state of Leinster’s outhalves has Johnny Sexton following Joe Schmidt’s firm advice to have his hamstring and body overhauled.

Joey Carbery, who streaked across the festive sky, had an operation on his ankle and is out for six weeks, while Cathal Marsh is still in sick bay.

It’s a touch of serendipity for Byrne, his agreeable current circumstances arising unexpectedly from calamity elsewhere. The ‘precious cargo’ though holds no sway.

“No, I definitely don’t think you can tell a 10 to do that,” he says. “Or any player. You think of things like that it’s probably when you are going to get injured. You just have to go out and do what you normally do.”

Sound thinking form the tall pivot, who will stand in where Sexton would have in Thomond Park.

Each big match, whether it is a crowd swollen to 38,000 at the Aviva or the sold-out Limerick ground is a new experience. But there’s little panic in the 21-year-old, few signs of him over-thinking the role or the magnitude of his assignment against Munster.

“I played the Zebre game and then the Scarlets game,” he explains.

“It wasn’t as if I hadn’t been played at all so I got those games under my belt which was great. I’d also been training with the lads away with Ireland and Marshy injured.

“So I was the only 10 at training and I was getting loads and loads of reps in. From that perspective it was great and my confidence was high because I was training well and I knew all the plays. It wasn’t such a big step up.”

One pressure off his shoulders is that Isa Nacewa will take the kicks, leaving Byrne to manage the position. That is seen as his strong suit, whereas Carbery and Sexton would back themselves to break more instinctively.

It is an aspect he’s happy to work at although he feels any notion that he has time to bed into the position is a lousy notion. While he is well placed to hold the shirt regardless, Byrne doesn’t expect it to come to that.

“I suppose people are going to judge you after one game or after a half, whatever it is,” he says understanding how the terrace takes no prisoners.

“If you play badly you just got to move on to the next one. If you play well you stay grounded or even improve again. Ultimately I’ve just got to do what I think is best and keep getting better.”

If Luke McGrath is scrumhalf, that’s some familiarity as they played in school together for several years. But again he’s not looking for cushions or small comforts to ease this passage. Byrne has confidence. He’ll stand on his own skill set, make decisions himself. It is the way it has to be as an outhalf.

In Carbery almost every player sees the possibility of phenomenal gain if chance is thrown their way. His comic book rise and rise from Clontarf to Chicago has been audacious, a heart-stopping tale of wonder and hope and heart warming too.

It is a lesson on what can be achieved with some luck, ambition, talent and hard work. Carbery’s story is not some fluke of a rugby lottery win.

“Look at Joey, he ends up playing for Ireland,” says Byrne. “I just have to keep working at what I’m doing, which I was doing and then wait for my chance, which I had last week. Sometimes you just have to be patient which is not always that easy.

“There are things obviously that Joey does better than me and things I do better than Joey. We are a different style of player. Definitely.”

In one respect he has nothing to lose and in another respect everything. Moving from four to one may be easier than from top dog to fourth pick. That’s for another day, if it ever arrives.

“It is very frustrating when you are not playing,” says Byrne. “Then you see Joey doing so well. It’s great for him on one hand. But on the other hand you want that. You want to be doing what he is doing.”

1 Winds of change as Ireland name a refreshed team, picked on form
2 Who is Caelan Doris? Meet Ireland’s newest rugby star
3 Dave Hannigan: Everyone believed they were on first name terms with Kobe Bryant
4 Holders UCC see off UCD to book spot in Fitzgibbon Cup semi-finals
5 Gordon D’Arcy: If Farrell can tap into our self-worth, we’re all on a winner
Real news has value SUBSCRIBE