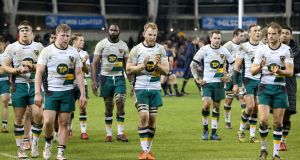 Dejected Northampton Saints troop off after their heavy defeat to Leinster at the Aviva Stadium. Photograph: Ken Sutton/Inpho

As forewarned and as was feared in a couple of Irish instances, completing back-to-back wins in the European Champions Cup proved a devilishly hard thing to do.

Only four teams out of 10 managed it, the lowest in the three years under the current format, with swings ranging from 12 points, in the case of the Scarlets’ surprise revenge win over Toulon, to 40, in Leicester’s less surprising, last-ditch win over Munster.

Hence, still no team has beaten Leicester twice, back to back, as the Tigers overcame a seventh third-round defeat a week later at their Welford Road fortress.

But if a week is a long time in the European Champions Cup, what a difference a year makes.

At this exact juncture 12 months ago, only Ulster were still effectively entertaining Irish hopes of a place in the last eight. This was despite an opening night beating at the Kingspan Stadium by Saracens, whereupon a December double over Toulouse revitalised their hopes.

In the event, Ulster still missed out on one of the runners-up slots by a point.

Munster had just lost back-to-back games against Leicester, without registering a single bonus point, and a 27-7 defeat away to Stade Francais in their rearranged game on the first weekend in January put paid to their slim hopes.

Leinster were even worse placed, having lost at home to Wasps and away to Bath before successive defeats against Toulon left them bottom of their group, where they would finish.

Connacht, consigned to the Challenge Cup, did reach the knock-out stages but the Champions Cup quarter-finals featured five sides from the Premiership and three from the Top 14.

Swelled by TV deals and private benefactors, the English and French clubs appeared to be pulling away. However, there will be no Anglo-French carve-up this year and the European rugby map is all the better for that.

But Leinster are now well placed to do the same, with a win at home to Montpellier certain to earn them a place in the last eight, and the knowledge that another win away to Castres would ensure a quarter-final at the Aviva.

Munster could have been as strongly placed at they not been beaten in last minute by Leicester, but with Glasgow completing a double over Racing ’92, that ought to dilute the Parisians’ interest in the competition, especially as they have plenty of ground to make up in their defence of the French Championship.

A win in their rearranged game in Paris on January 7th would return Munster to the top of Pool One, thus setting up a group decider away to Glasgow. Defeats in both games would seriously imperil Munster’s hopes of qualifying, but at the very least they still have an excellent chance of reaching the last eight.

So too Connacht, after their last-minute dramatics against Wasps at the Sportsground.

Surprise defeats over the weekend for three of the second-placed sides in their respective pools – Toulon, Montpellier and Bordeaux Begles – has lowered the threshold for the three best placed runners-up.

Victory at home to Zebre in their penultimate game, with a bonus point, will keep Connacht’s interests alive going into the final weekend.

Were it combined with a win for Wasps at home to Toulouse in round five, while denying the French side a bonus point, Connacht would require only a losing bonus point in Toulouse to ensure second place in Pool Two on 19 points. That was enough last season, and could be enough again.

A total of 19 points is the most Ulster can achieve, and would require bonus-point wins away to Exeter and at home to Bordeaux Begles.

A year on, their hopes of advancement are now the slightest of the Irish teams, but depending on results elsewhere two wins could yet be enough to reach the last eight.

Word is that the tournament organisers may conduct an investigation into Northampton’s selection and performance against Leinster at the Aviva Stadium last Saturday. That’s all well and good, but it’s worth stressing that such displays are in some respects of the organisers own making.

The old ERC ranking system, based on a co-efficient of performances in Europe over the previous five years, meant there were consequences for teams’ every Euro result.

In ranking all participating teams purely on the previous season’s league standing, at a stroke EPCR ridded any material incentive for teams unable to qualify for the pool stages. There will be plenty more performances akin to Northampton’s in the final two rounds.

That said, you’d have to wonder what damage a 60-13 beating, Northampton’s heaviest defeat in 101 European matches, will do to the club. And at the very least, you’d think that pride alone would have produced a better performance.

Yes, plenty of French sides take a dilettante attitude when out of contention, but second string players, when given a rare start, usually try to front up.

Last Saturday’s performance will scar Northampton for the remainder of the season, individually and collectively, and perhaps even in the longer term.

Dave Hannigan: Everyone believed they were on first name terms with Kobe Bryant 21:00
Holders UCC see off UCD to book spot in Fitzgibbon Cup semi-finals 20:38
Women’s hockey tour of South Africa ends with loss to Germany 19:49
Tiger Roll on course to bid for Grand National history 18:46
Sizing John to miss rest of season after suffering another injury 18:19
Here is your handy guide to sport on television this week