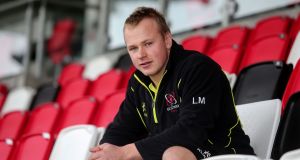 Clermont Auvergne prop Etienne Falgoux will face a disciplinary hearing in London on Wednesday after being cited for allegedly making contact with the eye are of Ulster centre Luke Marshall during last Sunday’s Champions Cup game in France.

The incident in the 31st minute of the game at Stade Marcel-Michelin happened during a ruck when Marshall was first in to tackle secondrow Arthur Iturria. After the play, Marshall is seen on the ground holding his face. Clermont went on to win the game 38-19.

Welsh citing commissioner Jeff Mark made the citing against the 23-year-old prop, with Law 10.4 (m) allowing sanctions ranging from 12 weeks at the low end, while top end sanctions start at 24 weeks.

Georgian international prop Davit Kubriashvili was sent off by Welsh referee Ben Whitehouse for charging into a ruck in the home game against Castres on December 11th, a game Montpellier won 32-14.

Replacement lock Paul Willemse was given his marching orders by English referee Wayne Barnes in the return leg last Sunday, where Castres won 29-23.

The South African-born player was also charged on Law 10.4 (h) ‘Charging into a ruck or a maul without use of the arms or without grasping a player’.