Dylan Hartley ‘let down’ himself, Northampton and his country 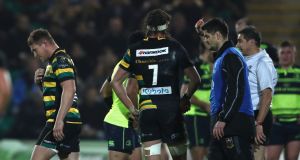 Dylan Hartley of Northampton walks off the pitch after being shown the red card by referee Jerome Garces against Leinster at Franklin’s Gardens. Photograph: David Rogers/Getty Images

The England head coach has also told the Northampton hooker that there is no guarantee he will hold on the England captaincy following the dismissal and subsequent suspension that will rule him out until January 23rd.

“Dylan will be more disappointed than anyone about what has happened and he has got to cop the penalty because the World Rugby directive on protecting the head is 100 per cent right,”

England have won 13 games in a row with Hartley as captain but Jones was far from equivocal about the 30-year-old retaining the armband for the Six Nations, which begins on for England on February 4thwhen France visit Twickenham.

“He is eligible for selection for the Six Nations and it comes down to the case for every selection - we pick the best 23 and if he is in the best 23, then he has a chance to be captain,” said Jones. “This is not the last chance for him but he understands that he can’t behave in the way he did.”

Hartley received the third red card of his career six minutes after coming on to the field as a replacement for Northampton against Leinster at Franklin’s Gardens this month.

The subsequent six-week ban took his career total to 60 weeks of suspensions and means that if he does lead out England against the French he will have had only six minutes of competitive rugby in the previous two months.

Hartley has a much better disciplinary record for England than Saints but if Jonesdoes decide to replace him as captain, the three main candidates for the role would be Owen Farrell, Maro Itoje and Mike Brown.