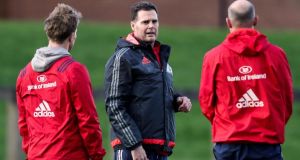 It will be intriguing to see how Munster respond to their first defeat in eight matches at Welford Road last Saturday in Monday’s Guinness Pro12 summit meeting with Leinster. In many respects therefore another highly charged occasion and a derby against their fiercest domestic foes in front of a record Thomond Park attendance looks the perfect opportunity to re-focus.

Apart from the obligation to put their best foot forward in front of their own fans, there’s the memory of the sides’ last meeting at the Aviva Stadium in early October, after which they embarked on their seven-game winning run.

There’s also Leinster’s storming of Thomond Park last Christmas (since when they’ve won 10 games in a row at their Limerick citadel), which ought to provide all the motivation in the world.

In a season of unrelenting ‘firsts’ for Rassie Erasmus, this will be his first Christmas in Ireland and his first Leinster game at Thomond Park, after his first experience of the Aviva Stadium in early October.

“It was a weird one for me,” he recalled at Munster’s High Performance Centre in UL. “There was a lot of people, but we were sitting in a sound-proof coaches box. It’s the first time I’ve experienced that. You couldn’t feel it at all, it was almost like watching a game on television without commentary.

“So it was difficult for me to get the vibe, but certainly the whole week building up to that, from the warm-up and afterwards when we’re out of the coaches box and us being out-played for the last 15/20 minutes, having been so in the match until James Cronin’s try was disallowed and then they went and scored.

“It’s definitely, apart from the rivalry, it’s a nice occasion, a big occasion; everybody is looking forward to it. Last weekend, despite the loss, the atmosphere in Leicester is also something special to be part of. It was something new, it felt very intense there. I guess, when Leinster are coming here hopefully it will be the same kind of atmosphere.”

That much is assured, for after winning the sides’ last three meetings, Leinster demand respect.

“They’re on such a roll, and while they also have to manage their players in the next two games they have unbelievable player depth. Their coaching staff’s history talks for itself, they gave us a good hiding at the Aviva and one of the three losses we had this year was against them. We’re expecting a very tough game against a well-coached team who are on a high at this stage. It’s a daunting task.”

While Leinster are expected to juggle their frontline Irish players over the Christmas period to some degree, it will be a surprise if Munster don’t earmark this home game for the likes of Donnacha Ryan, Peter O’Mahony, CJ Stander, Conor Murray and Simon Zebo.

Given the demands of the last two weekends, these upcoming derbies and then three European Champions Cup games in a row, Erasmus is sanguine about this.

Apart from long-term injuries for the young duo of outhalf Bill Johnston and wing-cum-fullback Alex Wootton in the first of their A side’s wins over Rotherham last Saturday week, Erasmus has a clean bill of health, with hooker Niall Scannell expected to be fit after sitting out training on Wednesday, while Francis Saili is expected to return either on Monday or the following Saturday away to Connacht.

“We will also have to rest and manage some of the international players so it will be challenging. We have guidelines from the IRFU that are communicated to all the provinces. They don’t tell us specifically for any game, more over a stretch of time, so many games.

“It’s not a surprise to us, from the beginning we’ve had to manage things around this,” added Erasmus. “I think we must try to spread it around over the two matches. It looks like we’re in the fortunate position to be able to spread it but then sometimes you might spread it and lose both games so you want to make sure you do the right thing. We haven’t quite made up our minds yet.

Having been sidelined since sustaining a shoulder injury at the end of last season, Saili is straining at the leash. “Yes, he’s very keen to play. He’s the kind of guy who enjoys when Munster plays well, so he wouldn’t be bothered that Jaco [Taute] played well. He’d like to play well with Jaco and Rory [Scannell] or Dan [Goggin] and we are just so excited to see him out on the park and now it’s our job to make sure we manage him back into the system whilst trying to win all the time as we change and test combinations. It’s an interesting time for us, but surely a very good situation to be in.”

Given Munster’s penurious financial position, which required help from the IRFU, reports linking them with All Blacks’ fullback Ben Smith always appeared fairly fanciful, also bearing in mind the kind of financial package, circa €700,000-800,000 per year, which would be involved. In any event, Erasmus said it was untrue.

“One of my briefs is to get Irish-qualified players well coached and available for Joe. All four provinces are the same and Ben Smith is obviously not Irish-qualified, so that’s not true.”