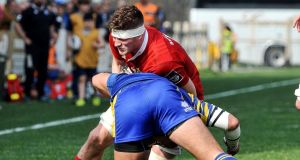 Munster’s Jack O’Donoghue in action during the Guinness Pro 12 game against Zebre at Stadio Lanfranchi in Parma. Photograph: Federico Matteucci/Inpho

Munster closed to within two points of Guinness Pro 12 leaders Leinster with a seven-try demolition of Zebre in Parma.

Ronan O’Mahony and James Cronin scored two tries each, while Rory and Niall Scannell, and Tommy O’Donnell also crossed for Rassie Eramsus’s side, who claimed a seventh bonus-point victory of the season and broke the 50-point mark for the first time of the campaign.

From start to finish the Munster management witnessed positive signs from their side who are just a week out from their Champions Cup quarter-final against Toulouse at Thomond Park.

Back into the side came Peter O’Mahony as captain, John Ryan and Niall Scannell, while his squad will be further boosted by the remainder of their Irish internationals in time for next week’s test – providing Conor Murray recovers form his shoulder injury.

For the most part Munster had little trouble containing the Zebre attack, but Derick Minnie and Lloyd Greeff crossed in each half as their eagerness to throw the ball around and play attractive rugby paid off.

But in truth Munster were not troubled here at all. Four minutes in Niall Scannell tagged on to the back of a rolling maul to score his team’s first try, a move that they replicated again 14 minutes later, but this time it was O’Donnell who benefited to score.

Tyler Bleyendaal was on the mark with two conversions, and he soon added a trickier third in the 26th minute after Ronan O’Mahony benefited from some great work from his pack to score in the left corner.

Minnie barged over from a yard on the half-hour mark, a time when Zebre had impressed to cut Munster’s lead to 21-7, but on the blow of half-time Bleyendaal drove over a penalty from halfway, which was earned by a powerful Munster scrum to make it 24-7 at the interval.

With three tries in the bag Munster ramped up their search for a bonus point haul and six minutes after the restart they managed to score the crucial fourth when Rory Scannell darted through a gap in the defensive line to score under the posts. In his efforts to stop the Munster centre scoring the try, Zebre scrumhalf and kicker Marcello Violi was sent to the sinbin, and with the pressure of the bonus-point chase gone as well as the numerical advantage to rely on, Munster drove home their advantage.

Two minutes later Ronan O’Mahony scored his second try of the game and his 11th of the season, following a great break and deft offload from Darren Sweetnam. Taking over the kicking duties from Bleyendaal, Rory Scannell was off target with the conversion but the southern province still held an extremely comfortable 36-7 led in the 50th minute.

Despite being a man down Zebre struck back when Greeff made the most of a good linebreak from Maxime Mbanda – Serafin Bordoli added the extras to cut Munster’s lead to 24 points.

But after that it was the Cronin show. He was introduced for Dave Kilcoyne after 51 minutes, and after a two-month recovery from a broken hand, he showed real hunger for the tryline and scored in the 62nd and 71st minutes – both scored from close range.

In between those two Cronin tries, Oliviero Fabiani became the second Zebre player to be sinbinned, but it mattered little for Munster who were in total control at that stage.

Erasmus even had the luxury of resting many of his key players ahead of next week’s Champions Cup last-eight clash, a move that saw Bill Johnston make his first appearance of the season for the province following his bright under-20 Six Nations campaign.

Munster’s Alex Wootton to join Connacht on year-long loan deal 13:01
Angling Notes: A strange fishing day 12:52
Lewis Hamilton the fastest in Austria Grand Prix practice 12:27
Ole Gunnar Solskjaer: ‘The sky’s the limit’ for Mason Greenwood 12:07
Monica Seles: The warrior queen who could have been the best ever 11:25
Here is your handy guide to sport on television this week