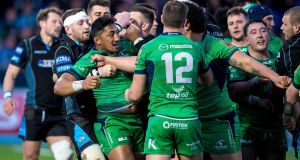 Connacht’s hopes of automatic qualification for Champions Cup rugby next season were dealt a massive blow with their failure to gain any points from their trip to Scotland.

For long periods Connacht looked like returning to last season’s championship form, but a lack of clinical finishing proved their downfall against a Glasgow side that reverted to their set-piece strength in the second half to get their noses in front before their lethal finishers produced a four-try bonus point.

It was a hugely disappointing result for Pat Lam’s men who were unable to bag their fifth win on the trot and add more momentum to their late push. It now looks increasingly likely the Pro 12 title holders’ only route to Champions Cup rugby will be via a playoff with French and English sides.

Connacht had dominated possession and territory in the opening half, but found themselves ahead by just two points at half-time, 15-13.

They had produced the perfect start, showing their skill with ball in hand as they went through the phases before fullback Tiernan O’Halloran injected the necessary pace to find a gap and a supporting Niyi Adeolokun finished off from 10 metres – centre Craig Ronaldson unable to add the touchline conversion.

Glasgow, struggling to get the hands on the ball, lived off Connacht mistakes, and they added their opening points through a Finn Russell penalty before, the Six Nations player of the year Stuart Hogg set up field position with a chip and chase, and hooker Cory Flynn charged over, with Russell converting.

With Bundee Aki and Quinn Roux making an impact, Connacht were back on the front foot, and from a superb clear-out at the ruck from Seán O’Brien, Connacht were able to spread the ball wide with captain John Muldoon crashing over and Ronaldson adding the extras.

However once again the Scottish outfit closed the gap when Connacht scrumhalf Kieran Marmion was caught in possession, and although not a true reflection of Connacht’s dominance, it gave the Scottish side the momentum at half-time and they started with a renewed pep in their step.

Although Connacht extended their lead to 18-13 with a 48th-minute Ronaldson penalty, Glasgow’s riposte was swift. Connacht failed to deal with the restart and the excellent Horne made the half break to put Glasgow on the front foot with Russell finishing and adding the extras for a 20-18.

A high tackle from Jack Carty then gave the home side all the momentum, and with the Connacht outhalf yellow carded, Glasgow, boosted by their international replacements, opted for the scrum before scrumhalf Ali Price darted over and Russell converted.

Connacht sought the necessary try from two penalties to touch, but execution let them down before they were handed a lifeline when Glasgow’s Tim Swinson was red carded for a swinging arm. Ronaldson’s penalty put just six points between the sides, before Peter Horne and John Cooney exchanged penalties. However Glasgow, although down to 14 men, finished the second half efficiently with Sean Lamont finishing with the fourth try to secure a bonus point victory.