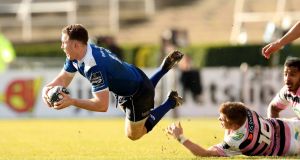 A fragile Leinster were lucky to leave the RDS with the winners points after a match against Cardiff that periodically swung wildly for and against the home side.

A wasted forward pass in the closing minutes from Cardiff fullback Matthew Morgan ultimately cost his side what would have been an extremely rare win in Dublin.

As it stands, a porous and unconvincing Leinster remain at the top of the Pro 12 table with few players putting their hands up for next week’s European Cup quarterfinal against Wasps in Aviva Stadium.

Although Leinster began the match positively, it spiralled into a see-saw game with neither team really able to gain control.

Leinster’s first try came after five minutes. Pressing Cardiff from the off centre Noel Reid threaded through a grubber for flanker Dan Leavy on the right wing. Leavy caught and swivelled, his momentum taking him over and Ross Byrne converting for 7-0.

It was a bright opening for the home side, who brought fullback Joey Carbery and prop Cian Healy in as early first receivers.

But Leinster’s comfort was short lived when they knocked on and turned over the possession in the middle of the park after 12 minutes.

The ball fed out to Cardiff’s captain, American Blaine Scully, who took off with Rey Lee-Lo on his shoulder. Lee-Lo took it on and put scrumhalf Tomos Williams straight in under the posts.

It was something of a sucker punch and when Leinster lost their next lineout deep in the Cardiff 22 on 20 minutes, the visitors sweeping move down the pitch showed the home side that this was a dangerous and capable side.

It was largely Leinster errors that invited the eighth placed team in the table back during the first 30 minutes, with a knock on, a lost lineout and an interception by Wales winger Alex Cuthbert all conspiring to turn Leinster attacks into scrambling defence.

Rhys Ruddock and Cian Healy both put in good shifts, taking the ball through hard yards but it was Michael Bent who set up Leinster’s second try on 32 minutes.

The tighthead rumbled up to the Cardiff line with three or four bodies trailing off him. He went down just short only for the canny Irish scrumhalf Luke McGrath to pick and go the extra inches, Byrne converting for 14-7.

The half closed with Leinster deserving of their lead but far from in charge of the game.

Shortly after the break Cardiff again stung back, this time as Isa Nacewa kicked a grubber down the left. Outhalf Gareth Anscombe picked it up and countered, feeding hooker Kristian Dacey.

From nothing and going backwards Cardiff were in space and Leinster in trouble. Scrumhalf Williams in support took it on to go in by the posts for the most simple of counter attacks, with Steven Shingler converting to make it 14-14.

Ross Byrne briefly put Leinster ahead with a penalty but then calamity hit again for the home side. Pressing up the left Lee-Lo smashed into Ross Molony with the ball and created space for captain Scully to burst forward. With replacement Sion Bennet in support, Leinster were again left flat and vulnerable with Bennet racing in under the posts and Shingler adding the conversion for 17-21.

It was the first time Cardiff led but in this match where anything was liable to happen, Leinster, galvanised by their frustration and pressing time worked the ball into the Cardiff red zone. A penalty conceded, outhalf Byrne chose to find touch.

Leinster duly collected and the rolling maul muscled forward, Ross Molony making the final lunge and referee George Clancy having to take several looks at the replays before awarding the try.

It was a precious and precarious 22-21 lead highlighted by Leinster again being opened up a minute later only for Matthew Morgan to pass short and forward with Cuthbert screaming at him wide on the wing.

But it ended that way, Leinster gratefully leaving as winners, Cardiff disappointed with what they left behind and what could have been.