Ulster stay on Munster’s heels with vital win in Wales 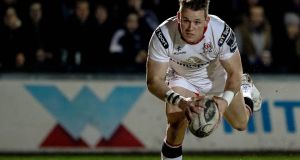 Ulster kept the heat on Munster in the race for the Guinness Pro12 playoffs with a 27-17 triumph at Rodney Parade.

The Dragons would not lie down after Craig Gilroy sent Ulster into an early lead and levelled the scores with a Rynard Landman score.

A slick backs move put Jared Payne over, but once again Kingsley Jones’ side struck back thanks to Ollie Griffiths

Jackson looked to have had the last say as his penalty secured a 20-17 win, before Rodney Ah You was sent-off for a reckless challenge on Carl Meyer.

But there was still time for John Andrew to drive over and rob the Dragons of a losing bonus-point.

Ulster director of rugby Les Kiss had resisted the temptation to send Ireland outhalf Jackson straight back into the starting XV.

But there was a place in the backrow for Iain Henderson, who had led the Ireland charge from the secondrow in their 13-9 triumph over England at the Aviva Stadium last weekend.

Ulster arrived in South Wales amidst growing concerns amongst fans that their beloved team could soon cease to exist after a Welsh Rugby Union takeover.

Ulster sent an early statement of intent to the struggling region when they turned down an easy three points in front of the posts and took a quick tap penalty.

The swift attack fizzled out, but they did not have to wait too long until they were over the try line for the first time.

Pienaar this time decided to use his boot and sent a kick deep into the Dragons 22. The ball bounced over the head of Dragons wing Tom Prydie and into the hands of Gilroy, who darted over the line to draw first blood.

Pienaar was on target with the conversion to give Ulster a 7-0 advantage after eight minutes.

Angus O’Brien narrowed the gap with a long-range penalty, before the hosts came on strong.

Ulster weathered the storm and regained their seven-point lead before half-time with a Pienaar penalty after Carl Meyer held on at a ruck after overing a dangerous kick in behind.

Meyer looked to have cut the deficit to four points at the interval, but his 45-metre penalty drifted wide and Ulster headed into the changing rooms with a 10-3 lead.

The Dragons bit back after half-time and followed Ulster’s lead by turning down a kickable penalty and going for the corner.

Just when they looked to exploit numbers out wide, Gilroy reached to intercept an O’Brien pass, but could not collect the ball and was shown yellow for a deliberate knock-on.

And the Dragons exploited their extra man immediately. They drove the resulting lineout to within inches of the Ulster line, before lock Landman finally forced his way over.

O’Brien landed the touchline conversion to level the scores at 10-10 after 48 minutes.

However, Ulster finally found their rhythm to retake the lead. They built the phases before replacement Paddy Jackson sent the ball behind the front line to Olding, who slipped a perfectly timed inside ball for Payne to cut through and score.

But Griffiths hauled his side back into it on 66 minutes when he charged down Paul Marshall’s box-kick and chased it down to score.

O’Brien converted to tie it up but Jackson landed the crucial penalty five minutes from time before Ah You shoulder charged full-back Meyer and was shown red.

And replacement John Andrew burrowed over and Jackson converted to give late hope of a bonus-point, but time ran out.