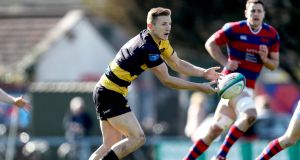 Teenage outhalf Alan Tynan was the toast of Young Munster after his last-ditch drop goal steered the Cookies past top four rivals Clontarf.

Munsters came away from sunny Castle Avenue with a 13-11 win and four precious match points as they ended their two-match losing streak in Division 1A, climbing above ’Tarf into third place in the process.

This was a tight contest throughout, Munster’s Cian Bohane and Robin Copeland making their presence felt as the visitors grabbed the game’s first try through left winger Craig O’Hanlon, which Tynan converted.

However, O’Hanlon’s opposite number Rob McGrath hit back with an unconverted effort, adding to David Joyce’s earlier penalty as the north Dubliners, who had won their last four matches, led 8-7 at the turnaround.

Tynan and Joyce exchanged penalties before the former stepped up as his side’s match winner right at the death. The Tipperary youngster’s coolly-struck drop goal gives Munsters a timely boost ahead of their April 8th date with Cork Constitution. Only two points separate the sides in the standings as they chase a much-coveted home semi-final.

This was a costly defeat for Clontarf who have fallen from second to fourth, but they are only three points behind Con with two rounds remaining. The defending champions, who welcomed back Conor O’Brien from a long injury lay-off, are away to St. Mary’s College in two weeks’ time before hosting UCD on the final day on April 15th.

Old Belvedere gave themselves a fighting chance in their battle against relegation from Division 1A as they shared the spoils with 14-man Lansdowne at Anglesea Road.

First-half tries from John O’Donnell (two) and Ireland Under-20 international Paul Boyle had leaders Lansdowne in pole position for another win, but with the visitors’ blindside flanker Joe McSwiney sent off in the second period, Belvo dug deep to claim a draw and two potentially vital points.

Looking to bounce back from defeats to Clontarf and Cork Constitution, Lansdowne had the better of the opening exchanges, although young outhalf Charlie McMickan missed a long-range penalty before injury forced him off with Fergal Cleary replacing him.

Mike Ruddock’s men kicked their next two penalties to the corner and a 12th-minute maul was finished over the line by O’Donnell on the right. His centre partner Mark Roche missed the conversion but Lansdowne doubled their lead in the second quarter, spreading the ball wide to the left for O’Donnell to finish comfortably.

Their third unconverted try followed on the half-hour mark when they opted for a scrum rather than a shot at the posts. Promising number eight Boyle picked off the base and burst over for the score, leaving Belvo with a 15-point deficit to overcome.

Limerick man Willie Staunton was introduced at the break and he opened Belvedere’s account with an expertly-struck penalty after 44 minutes. The home side suffered a setback when prop Adam Howard was sinbinned, however McSwiney’s dismissal in the 56th minute for a high tackle on Belvo’s Paul Pritchard proved even more significant.

Staunton uncharacteristically missed the resulting penalty kick, but Belvo’s persistence was soon rewarded with a 68th-minute try which saw them counter at pace from a turnover and returning Ireland Club international Sean Coughlan charged away to score in the right corner.

The conversion was missed but the hosts were now benefiting from that numerical advantage. Loosehead Howard made a powerful break and although he was halted inside the Lansdowne 22, fullback Daniel Riordan picked up the ball in space and clinically cut through for a try on the right.

Staunton was faced with a tricky conversion but the former Garryowen, Young Munster and Terenure halfback superbly split the posts to bring Belvedere level. The sides could not be separated in the closing stages, meaning bottom side Belvedere had closed the gap on Garryowen to three points at the foot of the table, while Lansdowne’s lead at the summit is down to two points with two rounds remaining.

Garryowen, who are battling to avoid relegation, outscored the Leesiders by three tries to two but fell agonisingly short in the end. Indiscipline cost them with Con outhalf Tomás Quinlan clinically dispatching four penalties through the posts as part of a 16-point personal haul.

There were scoring chances at both ends before Munster centre Sam Arnold broke the defensive line and touched down in the seventh minute for Garryowen. Captain Neil Cronin, who played for the Ireland Club International team last week, added the conversion.

Hunting for their fourth victory in a row, Constitution hammered away at a resilient Garryowen defence before Quinlan opened the hosts’ account with a 25th-minute penalty. There was no stopping Conor Kindregan eight minutes later as he collected a try, adding to his secondrow partner Brian Hayes’s recent hat-trick of scores.

However, Garryowen took a 12-10 lead into the break thanks to fullback Liam Coombes’s fifth try of the campaign, with a lot of credit going to flanker Mikey Wilson whose clever step opened up the space. Quinlan missed a subsequent penalty before the half-time whistle was blown.

The Constitution forwards forced the issue on the resumption as their scrum began to cause damage. Quinlan landed two penalties from three attempts, splitting the posts after 45 and 48 minutes and then hitting the woodwork with a subsequent attempt.

The Light Blues kept plugging away and were rewarded with their third try in the 67th minute. A well-worked backrow move, including a strong run from number eight Bailey Faloon, saw scrumhalf Cronin released for an unconverted try and a 17-16 lead.

The Corkmen responded with Quinlan’s fourth penalty success in the 76th minute but Cronin cancelled that out with three points of his own. However, the playoff chasing hosts, who had now nudged their way into second place, denied Garryowen with that decisive try from Abbott under the posts.

Relegation-threatened Terenure College climbed out of the bottom two with a hard-earned draw with UCD at the Belfield Bowl.

Terenure have edged ahead of Garryowen in the battle of the basement sides, but they almost pipped the mid-table students in the final seconds with fullback Jake Swaine narrowly missing a difficult penalty from out on the right wing.

The UCD pack nearly muscled their way through for a try early in the second period, the combined ball-carrying efforts of Greg Jones, Josh Murphy, Andrew Porter and Peadar Timmins almost leading to a score.

However, Terenure, whose confidence was boosted by their recent win over Old Belvedere, showed huge determination in defence. They were driven on by captain and Ireland Club international Kyle McCoy, with centre Stephen O’Neill and number eight Eoin Joyce also standing out.

’Nure’s cover defence thwarted Hugo Keenan as he almost got away following a neat link-up with Will Connors. Into the final quarter, Gilsenan had another penalty miss before Swaine, the visitors’ goal-kicking fullback, found the target for the opening score.

Discipline was key in the closing stages and UCD looked to have the momentum after Terenure’s hard-working blindside Robert Duke was sin-binned and Gilsenan mopped up with the levelling three points. However, it was ’Nure who had two final shots at the posts as Swaine was just short from halfway and then pushed a last-minute effort wide in a very tense finish.

These two attack-minded sides went at it hammer and tongs, with Mary’s capitalising on a blistering start in sunny conditions as they gained some revenge for September’s frustrating 31-19 home defeat to the students.

Mary’s jet-heeled fullback Terry Kennedy ran in a superb solo try to open the scoring and flanker Gus Jones, a former England Under-20 international, finished off a fine team move for a second unconverted try.

The Trinity defence gave away again as number eight Kevin Sheahan broke through by the posts, with Leinster’s Cathal Marsh adding the conversion for a 17-0 lead after just 24 minutes.

The hosts, who had won their last two matches, found a chink in Mary’s armour when secondrow Cathal O’Flaherty was sinbinned and pressure in the scrum yielded a penalty try which winger Bryan Mollen converted. A 38th-minute penalty from Marsh closed out the first-half scoring at 20-7.

The Trinity backs, including Ireland Under-20 starlet Colm Hogan, were particularly potent in the second half, with place-kicker Mollen bagging a brace of tries and USA international Tim Maupin also touching down. Their bonus-point score arrived in the 79th minute.

But Jamie Cornett’s Mary’s side were out of reach by then, winger Ian O’Neill securing their bonus point with a try created by Kennedy and Conor Hogan, while Marsh added a second penalty before industrious centre Darren Moroney deservedly put his name to try number five.

Mary’s and Trinity are now sitting sixth and seventh in the Division 1A table, six and five points clear respectively of the relegation playoff position. This win was hugely important for Mary’s as they still have to play title contenders Clontarf and Cork Con.