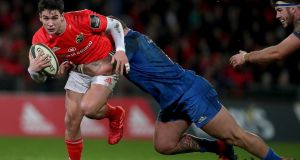 Guinness Pro14 chief executive Martin Anayi remains optimistic that a finale of sorts to the 2019-20 campaign can still be salvaged from the damage caused to the rugby season by the coronavirus pandemic.

Playing games, initially, behind closed doors and also working in double-headers or midweek games are other possibilities being considered.

“I am actually really confident now,” Anayi told The Irish Times. “I think if you’d asked me that question a few weeks ago we just didn’t have as much as we have now but we’ve had presentations from World Rugby, EPCR, and the medical advice is that there is going to be a phased relaxation of rules around lockdowns and social distancing.

“So, we should be planning for every eventuality but it’s looking like July/August/September being the kind of window that rugby can resume in one shape or form. That might mean initially behind closed doors and then, depending on the testing, some form of release on the amount of people allowed into a stadium.”

To this end, World Rugby are co-ordinating with other sports as well as all their own stakeholders. “After talking to us, Brett Gosper [World Rugby chief executive] was on the phone to the NFL and the Bundesliga for example, and other sports facing similar challenges.”

Anayi is also in dialogue with the LNR director general Emmanuel Escalier and the PRL CEO Darren Childs, in drawing up finales ranging from one week (and straight to final shootouts based on current standings) to longer windows.

In the example of a five-week finale to the 2019-20 Pro 14 season, encompassing two rounds of derbies before the playoffs, the remaining unplayed games could be declared 0-0 draws, with two points apiece, so as to complete both the Conference A and B tables.

“It is definitely a jigsaw puzzle but everyone is right on it now,” says Anayi, “and all the best practice of how we return to play because everything from technology, testing, health and safety of the players and staff has to be thought about, and we have to make sure we don’t commit to something that we can’t then deliver.

“The most important thing is that it’s got to be safe. That’s number one. But all indicators are that we will get back to playing, presumably for a period of time behind closed doors, and in July/August.”

In addition to a phased return to group training, potentially a quarantined zone of training, before team and then contact training (probably requiring four to six weeks), World Rugby’s medical team have also advised the Pro14 that a “phased return to travel” is also likely. Cue derbies – which are also more popular with broadcasters, sponsors and supporters – behind closed doors.

However, Anayi accepts that the cross-border element of a competition involving teams from five countries still makes completing the Pro14 “more complicated” than the Top 14 or Premiership.

Although the stakes are high for the Pro14, even if the 2019-20 season was ultimately abandoned without a finale, Anayi maintains that the respective unions would miss out on “a lot less than half” of the €25 million-plus per season generated in broadcasting deals.

As for the doomsday scenario of rugby not returning for, say, the remainder of the calendar year, Anayi says the 2020-21 Pro 14 would still have “the flexibility to cope”.

All of this will become clearer “in the next few weeks because World Rugby are leading workshops into where next season stands” regarding the rescheduled Six Nations games, July tours, Rugby Championship, autumn tours, and so on.

“We just need to be as flexible as possible and at the moment, what we understand from our medical advisors is that it will be possible to deliver 100 per cent on next season.”

One positive which Anayi believes has emerged from all this is the better dialogue between all the stakeholders than ever before and renewed discussion on a global season. “And I think we’ll come to a much better solution than we’ve ever done before.

“I was in San Francisco,” he added, in reference to the World Rugby forum on a global season in January 2017, “and now you’ve got all the Leagues, Sanzar and all the Unions discussing it, and World Rugby leading video conference calls on it, so the solution is in there somewhere because it’s only arbitrary that the season starts in September and ends in June or July.

“This is a good opportunity to have a better narrative to the season and a better season from a player welfare point of view. We had a really good presentation from Omar [Hassanein, CEO of the International Players’ Association] and welfare isn’t just about a player being injured, it’s players’ mental wellbeing as well.”

In this, he also accepts “less is more” and to that end all competitions have to consider whether they need to be playing as many matches as they do.

“I think that’s probably the thing that is being discussed most at the moment, which I’m excited about,” says Anayi. “People are saying ‘look, we don’t need to be playing as many games, we just need to have a better narrative to those games that we do play’.”

War and romance behind 147 unbroken years of the Nationals 01:00
FAI chairman Roy Barrett predicts sense will prevail at EGM 23:00
Georgie Kelly on the double as St Pat’s move up to fourth 23:09
Lyon make Juventus wait another year despite Ronaldo double 22:41
Real Madrid crash out to relentless Manchester City performance 22:26
Crossword Get access to over 6,000 interactive crosswords