Friend warns Connacht need to be at their very best 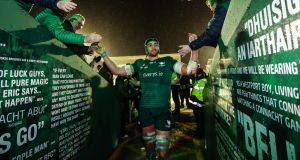 Connacht’s Ultan Dillane will play against the Southern Kings due to the postponement of the Ireland v Italy Six Nations fixture. Photograph: James Crombie/Inpho

Connacht have put themselves under pressure to maintain their winning form over the Isuzu Southern Kings when the two meet at the Nelson Mandela Bay Stadium tomorrow (1pm Irish time).

After suffering a heavy 41-14 loss away to Edinburgh last weekend, Connacht boss Andy Friend says a win is a must to keep their Pro14 ambitions alive.

“We know what’s at stake. We now need seven wins from nine to get a home semi-final. The Kings are a dangerous side, especially at home, so we have to be at our very best.”

Friend’s side has never lost to the Port Elizabeth outfit, and they have been boosted with the late additions of Ireland squad members Ultan Dillane and Dave Heffernan due to the postponement of the Ireland v Italy Six Nations fixture.

With both Quinn Roux and Gavin Thornbury sidelined with injury, Dillane is included in the starting XV to partner Joe Maksymiw, while Shane Delahunt will make his second successive start at hooker, with Heffernan on the bench. Delahunt will be joined by seasoned campaigner Paddy McAllister, and Dominic Robertson-McCoy, who comes in for the injured Finlay Bealham.

There is a regular look to the remainder of the side with a couple of rotations – Tom Daly for Peter Robb in the centre and Caolin Blade for Kieran Marmion.

Both sides have endured lengthy travel this week – the Southern Kings, just back from Wales where they lost to the Scarlets 36-17. They have included a couple of notable youngsters in their squad, including 23-years-old outhalf Siyabonga Masuku in his first start, following an injury to regular Demetri Catrakilis, while on the bench is 18-year-old Tiaan Botes, who will make his first senior rugby appearance on Sunday.

The Kings have only one win to date this season – a 16-14 victory over the Ospreys – but their physicality, coupled with their athletic ability, did not make it easy for Connacht in the Sportsground despite a 24-12 defeat.

“We didn’t get the result we wanted in Edinburgh, so this week has been all about ensuring we get another win on the board. This mini-block of three games is key for us,” says Friend, “so I believe we have named a squad that can get the job done on Sunday and finish on a high before the short break”.