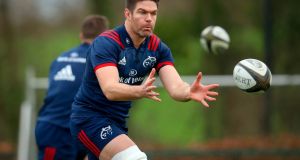 The brave new world, if not dawn, of Monday night rugby has the organisers of the Pro14 very excited, and it makes sense too, even if the 8.15pm kick-offs appear a tad anti-social.

In any event, the first of them has been teed up nicely by Munster and Cardiff being the only two unbeaten sides in a Conference B summit meeting.

Continuing the theme of their season to date, all told Johann van Graan makes another nine changes. Billy Holland captains the side in his first appearance of the season, while James Cronin, Kevin O’Byrne, and Stephen Archer form a new front-row and academy flanker John Hodnett comes in at openside and Gavin Coombes at number eight.

Craig Casey and Academy outhalf Ben Healy continue in the half backs while Dan Goggin makes his first start since in midfield since February and the curiously overlooked Darren Sweetnam makes his second appearance in that time.

Calvin Nash makes his first appearance of the campaign on the other wing. In a fairly potent-looking bench featuring Rhys Marshall, Jean Kleyn, Chris Clete, JJ Hanrahan and Damian de Allende, Academy prop Josh Wycherley, younger brother of Fineen, is in line for his Munster debut.

Early days, it’s true, but Cardiff have been the relative surprise package, backing up their 14-man win in Zebre with a commanding win over an off-colour Connacht.

Rey Lee-Lo and Willis Halaholo’s form one of the competition’s most dynamic midfield partnerships and they’ve a sharp cutting edge in the back three of Matthew Morgan, Aled Summerhill and Halam Amos.

Ultimately, this one looks like it might stay in the balance late enough into the night, but Munster have bean Cardiff in all eight of their previous treks to Thomond Park.