Plenty of positives for Farrell as Ireland hit the ground running 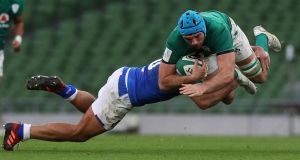 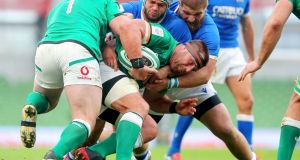 Ireland’s CJ Stander is tackled by Gianmarco Lucchesi and Pietro Ceccarelli of Italy during the Six Nations clash at the Aviva Stadium. Photograph: Bryan Keane/Inpho

Before the game, as Johnny Sexton said on behalf of probably everyone in the Irish set-up, they’d have taken a 33-point win over Italy on Saturday at a deserted Aviva Stadium, and after it, no less than Andy Farrell, he wasn’t about to change his mind.

That said, on reflection, the concession of a soft second try rather than dealing with the game’s last restart and adding an eighth of their own will have irritated captain and head coach as much as anyone. For the nagging suspicion remains that Ireland could certainly have won by another seven if not 14 or 21 points.

However, after an eight-month break, Ireland were never going to be perfect on Saturday and there was much more to admire than bemoan.

Living in a bubble and now effectively playing in a bubble, which made their exhortations echo even more, it was striking how vocal the Irish players were in their communication with each other during play and then in vocally deriving more energy from positive outcomes. And there were a fairly continuous stream of them.

“To create your own energy, you have to do good things because you can’t create energy going backwards or conceding scores,” said Sexton. “We did some good things, got some good bounce off the back of it and showed some brilliant energy throughout the game.”

This started with Irish the defence even if, ironically, the game was bookended by gaps which led to ten points by the left-footed 20-year-old Italian outhalf Paolo Garbisi, who definitely looks to have something about him given just two games previously in the Pro14.

Even before conceding the first of those two line breaks, when Sebastian Negri exploited the gap between CJ Stander and Sexton, it was noticeable how much line speed the green line were consistently seeking to inject. And until the last play of the game, when Ed Byrne didn’t push up in line with Bundee Aki, that never wavered.

Mike Catt had spoken beforehand about the debutants driving the team’s energy, and the defensive effort was led by the speed and machine-like chop tackle efficiency of Will Connors, who made all 18 of his tackles, including four dominant ones.

Complementing this was the effectiveness of Caelan Doris and Stander (just the 21 carries for 109 metres) and the selfless donkey work of the tight five at the breakdown, notably Tadhg Beirne and Andrew Porter.

The rewards were significant, with Ireland scoring three of their tries from the 11 breakdown turnovers they generated, each of them providing further evidence of their licence to play more heads up rugby.

The Doris’ steal, Aki link and perfectly weighted and angled grubber by Conor Murray for Hugo Keenan’s second try on debut was a case in point. So too the collective transition from defence to attack which led to Robbie Henshaw and Keenan releasing Stander up the touchline and, after Doris’ superb line from depth, Sexton’s own finish.

Best of all, possibly, was Peter O’Mahony’s gorgeous offload for Aki’s fine finish, one of 12 offloads by Ireland in the game. Hallelujah!

After a neat and strong finish for his first try, Keenan might have well have had a ten metre hat-trick but for his second being overruled for a marginal off-the-ball obstruction by James Ryan in Jacob Stockdale’s counter.

“They typified our performance in terms of our energy, those two guys led it in many ways,” said Sexton of the two starting debutants.

“Will has so much energy to get off the line and make tackles but you can’t just label him as that because he did some really good things with ball in hand as well.”

“Hugo got a couple of tries and could have had another one, a couple of outstanding finishes. The edge he provided, that work off the ball, ball in the air, all the things you’d expect of a top-class back three player, he provided those. I’m delighted for him.”

James Lowe won’t be walking into this team come November after all.

Of course, not only would a repeat of those two Italian line breaks probably ship 14 points next Saturday, but an altogether more potent French backline will ask way more questions of Ireland defensively. Ditto the aggressive, finely tuned Shaun Edwards defence.

“We need to sit down and have a look because some of the things that Italy did to us today, France will do to us next week, in terms of that line speed,” admitted Sexton, whose cut-out pass was intercepted by Edoardo Padovani for Italy’s first try.

“That pass I threw, we can’t do that next week. We can’t throw long passes against that rush defence. So we need to learn lessons from today.

“It’s a huge challenge to go to France and win, never mind to be talking about a bonus point. We don’t even know if that bonus point will be needed yet because England still have to go to Rome.”

“But we need to focus on our performance. We’re not going to get there without a good performance so we have to focus on that and build into a massive game for us.”

That about sums it up all right.