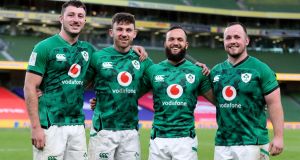 To Hugo Keenan and Will Connors the tries and the plaudits then, but for the two other debutants off the bench, even Jamison Gibson-Park’s journey from the Great Barrier Island to playing for Ireland is eclipsed by Ed Byrne’s story.

Two ACL injuries, which restricted him to just seven minutes’ rugby between October 2014 and January 2017, would have broken the will of lesser men. But his remarkable resilience and, it has to be said, Leinster’s unstinting loyalty, was rewarded when he was sprung from the bench in the 57th minute.

The pity is, for Byrne especially, that all those who helped him soldier through those dark days, months and years weren’t here in person to witness it. But even from the remoteness of a post-match zoom conference from ground floor to, ironically, the assembled media on level 5, there was no disguising the 27-year-old’s sense of understandable elation.

“Yeah, I was absolutely delighted to get the opportunity and it’s been a long road. There’s a lot of people out there that I’d love to thank, starting obviously with my family, my friends, my girlfriend Rebecca who has been there since the start of the tough times; she didn’t know what she was signing herself up for but she’s been my rock in fairness.”

“My brother Bryan as well, the two of them have been huge for me, along with the rest of my family and then obviously everyone at Leinster, who saw what I had to go through and they played a big part in getting me through it and helping me, Ferg Kerin, the rehab staff and all involved.”

His voice now croaking with emotion, Byrne paused and said: “So I’d just like to thank people like that.”

There have been particularly emotional calls with his twin brother Bryan, who had nailed down a starting position at hooker with Pat Lam’s Bristol before a hamstring sidelined him for their European Challenge Cup final win.

Asked about his week, he described it simply as “mad”, notably last Wednesday, going from the high of being named in the 23 to immediately running out to train and then afterwards turning on his phone to “floods of text messages”.

“So that was emotional, and then the phone calls home to family after the selection, they were all huge...my girlfriend again, I was very emotional. Today, I was just trying to stay in the moment as much as I could and not let it all get too much or overthink it.”

“The anthems are obviously a huge part, that was something I dreamt of for a long time, getting to stand out with the team and sing the national anthem, so that was a very special moment.

And then when the game started it was about staying in the moment and going through your process.”

Reflecting on that 28-month lay-off, Byrne said: “Yeah, I think since I was six or seven years old the dream was always to play for Ireland. That was always something I dreamt of, and then once that lay-off happened, the huge amount of rehab I had to go through, initially the goals changed a little bit in terms of trying to stay at Leinster and get a contract because obviously it was a long period. And thank God that Leo Cullen and Guy Easterby gave me that chance, so I have to thank them a huge amount for that.”

“The goal then was to get back fit and then from there it was to try to get into the Leinster team, which had a lot of competition at the time. Then it was just trying to play well for Leinster, to get regular game time.

“That’s all I could do, it was just building blocks and then once I got back on my feet, the dream had never changed, that’s all I ever wanted to do was to play for Ireland, so I’m just unbelievably grateful to get the opportunity today.”

Byrne’s cameo was productive too. He was introduced straight after Edoardo Padovani’s intercept try made it 24-10 heading toward the final quarter, whereupon Ireland responded tellingly with a three-try salvo, including the first of two maul tries by the pack.

Now, having had the taste of Test rugby, Byrne wants more.

“Yeah, 100 per cent,” he admitted, laughing. “No, it was a dream come true getting the first one and hopefully I’ll be able to build on it, please God.”