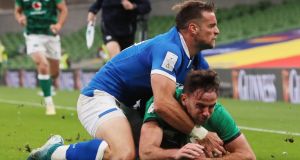 It was quite a relief when our boys and girls’ Six Nations games against Italy kicked off on Saturday because the build-up to both had lasted almost eight months, not even a Lions Tour getting those levels of anticipation.

Over on ITV, Mark Pougatch asked his panel what they’d been up to during the break, Maggie Alphonsi telling him that she’d had a baby three weeks before. That was a feat that neither Brian O’Driscoll and Rory Best could match, so they resisted boasting about sourdough-making, jigsaw-solving, Schitt’s Creek-binging and the like, and left it there.

Incidentally, did it appear initially to anyone that Best was naked from the waist down, his skin-colour-ish trousers kind of blending in to the background of the ITV studio? Only the luminous yellow sliotar in Croke Park later in the day prompted a more startled reaction at first.

Anyway, neither of the fully-clothed Virgin Media panellists could claim to have given birth recently either, so there was no baby talk from Matt Williams and Ian McKinley, apart from when they chatted about our senior international new-borns Will Connors and Hugo Keenan, both of whom were making their debut.

“As Matt Williams would call him, ‘a tough auld rooster’,” said the pitchside Shane Jennings of Connors, before going on to describe him as “a bit of a dog”.

The rooster-dog cross had a heck of a day, as it proved, earning himself the man of the match award, while Keenan didn’t do too badly either, helping himself to two tries and presumably concluding that international rugby is very easy.

Apart from the seven tries, the highlight of the game was when the fake-crowd-sound-operator lowered the volume every time a fella was shaping up to take a penalty or conversion, which proves that fake-rugby-crowd-sound-operators are way more sportsmanlike than their football equivalents who appear to turn the volume up to max every time poor Bruno Fernandes has stepped up to take a penalty of late.

After the victory Joe Molloy tried to explain to us what Ireland now need to do to win the title; a bonus point triumph over France is enough to do the trick but a non-bonus point win would leave them needing England not to beat Italy by 24 points more than Ireland beat France . . . ah look, just have an abacus ready for next Saturday.

Our women play France next weekend too, but the permutations are a bit simpler: they can’t win the title. But they did the business against Italy, if not with the smoothest of displays, Niamh Briggs and Fiona Steed saluting them for getting over the line, considering their rustiness, but neither overly impressed by the performance.

What Chloe Mustaki and Karen Duggan wouldn’t have given for a scruffy win – or even a draw – to analyse on Friday evening after Ireland’s defeat in Ukraine.

“It’s great to have sport back in our lives,” Mustaki had said before the game, and we’d all have been sitting there nodding. But after a calamitous own goal, Katie McCabe hitting the woodwork twice, the second time from a penalty, and a string of missed chances, you began to wish international football had never emerged from lockdown.

Peter Collins attempted to be super chivalrous about the own goal. “It’s not a situation where we want to apportion blame, but could this have been dealt with better,” he asked of a situation that could have been dealt with better even while blindfolded. “Of . . . course,” said Duggan. “As the old saying goes, if we didn’t have bad luck we’d have no luck at all,” he added.

“You create your own luck,” Mustaki replied, reckoning there’s nothing unlucky about calamitous own goals, missed penalties and spurned chances.

And no one, you’d guess, would have nodded more than the players themselves. They wouldn’t be shy about apportioning blame, either. On themselves.