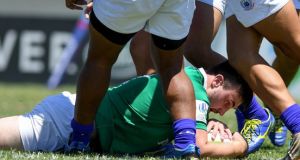 It was a case of mission accomplished, with the performance of secondary importance and victory paramount in avoiding a relegation tussle next Sunday when the final standings are decided in the Junior World Championship. That pecking order will also determine the seeding for next year’s tournament.

The Ireland Under-20s will compete for ninth place, something of a relief given the disappointment of the pool stages and a horrendous injury profile, both before and during the tournament.

Samoa, as Ireland had done against New Zealand in the final pool match, didn’t field anything like their strongest side, recognising that this was a match they were unlikely to win and trying to keep some players fresh for their relegation match. As it transpired Samoa proved correct in their assessment, eviscerated up front, their fate largely sealed by half-time.

At that stage Ireland had scored four tries and it was apt that they all came from forwards because the Irish pack were directly responsible for the dominance of Peter Malone’s side. They dismantled the Samoan set piece, scrum and lineout, and a direct style allowed them to make significant metres, sucking in defenders and creating space across the pitch.

Hooker Ronan Kelleher opened the scoring – he would add another in the second half – on six minutes while tighthead prop Peter Cooper plunged over from a yard five minutes later. Outhalf Conor Dean kicked one from two conversions and when the excellent Fineen Wycherley drove through two tackles to score under the posts the only matter for debate appeared to be the final score-line.

That wasn’t quite the case because Ireland’s discipline was poor conceding seven penalties in the first 30-minutes, indiscipline that continued unchecked throughout the second half. It gave Samoa a foothold in the match and allowed them to get some easy territory.

Theodore Solipo crossed for a try but on 37-minutes but Samoan scrumhalf Howard Tagoai received a yellow card and during his 10-minutes in the bin either side of half-time Ireland tagged on tries from Oisin Dowling and Calvin Nash.

From the 60th minute the teams shared six tries, Kelleher, centre Ciaran Frawley and number eight Caelan Doris all crossing the Samoan line. Ireland coach Peter Malone will be disappointed by some of the close-in defence and the unchecked indiscipline, but overall will be pleased to have secured a first win.

The Irish pack was outstanding to a man, while Jack Stafford was sharp and lively at scrumhalf. Right wing Michael Silvester enjoyed a superb game, consistently sidestepping the first two or three tackles and making significant metres to give his team a target going forward, while replacement David McCarthy enjoyed another fine outing.

Ireland will now place hosts Georgia in a game to determine which team finishes ninth and 10th on Sunday while Samoa will face Argentina will the loser relegated from the elite tier of the Junior World Championship.