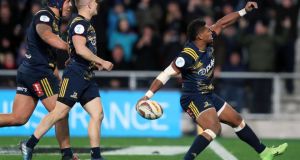 Another one that got away, and the taste of this defeat will feel especially bitter as the Lions had the lead and then the chances to win it. Playing their third game in seven days, they had to dig deep too, and it would have been some win, but in the greater scheme of things this high tempo, highly entertaining affair won’t do their preparations for the test series undue damage.

The Lions were visibly tiring long before the end. Their work in contact wasn’t as explosive and their legs looked heavier. Their scrum wilted, particularly after the front-row changes, and they came out on the wrong side of Angus Gardner, who gave them little again, to the tune of a costly 12-7 penalty count.

Ultimately, all of that was too much as the Highlanders came back from 22-13 down to win, although Owen Farrell had a glorious chance to extend the lead to 25-20 at one point. A host of players dug incredibly deep, not least CJ Stander who backed up his performance off the bench last Saturday to still be making big tackles and winning turnovers at the end.

Likewise Alun Wyn Jones, who backed up his 80 minutes against the Crusaders with almost another hour as a replacement for Courtney Lawes, who suffered a suspected concussion in the first half.

Sam Warburton looked short of fitness, however, and while there were strong outings from Iain Henderson and Rory best, Jared Payne had a mixed bag, as did Jonathan Joseph and Greig Laidlaw with the wingers again undistinguished.

The win may have come at a further cost, with Rhys Webb leaving the field after one of his trademark breaks with what looked suspiciously like a hamstring injury.

As expected, it was akin to the Lions midweek meeting with the Queensland Reds four years ago, as this time the Highlanders took the game to the Lions with their high tempo brand of rugby, putting plenty of pace and width on the ball, and mixing things up with quick throws and quick taps whenever possible, as well as their rich array of kicks.

They kick the ball more than any other team in Super Rugby, but they do so inventively, and invariably do so to reclaim possession. The diagonal little grubbers on either flank from outhalf Lima Sopoaga, going left to right, and Teihorangi Walden from right to left, were almost impossible to defend.

True to type, the Highlanders came flying out of the blocks and might have been a try to the good in the opening stanza of the match. It was quite a breathless opening too, with no stoppage for the first three minutes and 39 seconds.

When Waisake Naholo latched onto Sopoaga’s grubber, it required a resolutely brave tackle by Payne to stop the try, with Tommy Seymour also helping to prevent Naholo grounding the ball. Malakai Fekitoa probably butchered an overlap and a try by taking too much out of the ball and the home side had to be content with a three-pointer by Sopoaga for offside.

Something similar happened at the other end after Webb dummied Kayne Hammington on the blindside of the scrum, only for the latter to make the covering tackle on Jack Nowell. But when Walden put the ball out on the full from a Highlanders scrum outside the 22, Biggar went up the line, Best found Lawes and after Stander carried up the middle, Lawes bounced off his feet for a big carry before Brockman stopped Seymour inches short and the chance finally went when Webb tried to pirouette over the ruck but lost control of the ball, with an overlap to his right.

Likewise, the Lions had to be content with a consolation three-pointer from Biggar for offside.

The Highlanders’ tempo finally did for the Lions when flanker Gareth Evans set a move in motion with a lightening quick tap - so quick it didn’t look like he actually tapped the ball. After Naholo had made yards up the right, yet again, when the ball came back to Evans on the left wing he bounced through Joseph’s tackle and offloaded over his head to Teihorangi Walden.

A couple of quick recycles later and Naholo popped up the middle, bouncing through Payne and Lawes for the try which Sopoaga converted. Lawes copped Nahol’s left elbow in the head and was led off groggily, while the officials, including TMO Ian Smith, all somehow managed to miss a fairly blatant obstruction by Highlanders lock Alex Ainley on Robbie Henshaw, and this despite the latter’s entreaties to an unmoved Gardner.

At this point the Lions were reeling a little, all the more so when Tevita Li promptly broke upfield again before being brilliantly collared by Henshaw and penalised for not releasing.

The Lions needed a counter-punch, and delivered one.

After Best carried off a lineout maul, Biggar worked a loop around Stander, taking the number eight’s offload which took out two players to then dummy Naholo and release Joseph. He had a three-on-one and as Richard Buckman drifted out Joseph finished well. Biggar landed a fine conversion to draw the sides level.

He also took a heavy hit from Walden in again showing his deft hands before his flat pass saw Kyle Sinckler make big yardage, only for Payne to drop the prop’s pass. Evans then palmed a bouncing grubber by Walden into the hands of Li, who again broke clear only to pass loosely infield and an energy-sapping half finished 10-10.

Soon after the restart though, Sopoaga cross-kicked both left and then right, and for the latter, which was intended for Naholo, Seymour read the kick well to gather and score untouched from 30 metres. Biggar missed the conversion and also an ensuing penalty to touch, which led to Sopoaga landing a penalty to make it 15-13. But Sopoaga’s wild pass behind Fekitoa forced the centre to retrieve the ball and offload behind his own line, and Naholo put his foot on the dead ball line in clearing, thus conceding a five-metre scrum.

Joseph took a good hard line off Laidlaw to set the move in motion, and multiple phases later Payne did well to keep the move alive when looking isolated before Henderson made a good carry over the gain line, and Warburton had the presence of mind and strength to pick and drive over under the posts from eight metres out.

Biggar’s conversion gave the Lions a 22-13 lead, but the way they were already showing signs of wilting you sensed they’d need it, all the more so when Payne failed to hold the kick-off. They fell consistently foul of Gardner too. With consecutive penalties, the Highlanders opted for the corner and then Fekitoa opted for a quick tap, before Henderson made a fine steal on the line.

Two more penalties saw the Highlanders go back to the corner, and this time their hooker Liam Coltman scored off his own throw to John Dickson, and Marty Banks - on for the erratic Sopoaga - converted.

The frontrow changes only led to more pain for the Lions as Dan Cole was penalised, but good recycling off a counter by Biggar and a good offload by Alun Wyn Jones led to Brockman tackling a man off the ball. But Farrell, on for the battered Biggar, missed a 40 metre penalty to the right of the posts after his kick had been delayed by the highly verbal Gareth Evans querying whether Farrell was permitted to do so. He was, but it felt like a costly miss.

Sure enough after Brockman beat Seymour in the air, despite the second of two fantastic tackles by Stander earning another turnover, the Lions scrum was shunted into the ground, and Banks made it 58 out of his last 59 kicks with the penalty.

The Lions had two last chances, after another steal by Stander, but Elliot Daly was short from six metres inside his own half and with the last play, a well-worked midfield move ended with Joseph dropping Farrell’s pass.