Matt Williams: Two weeks in a hotel room with a broom handle shoved up your nose 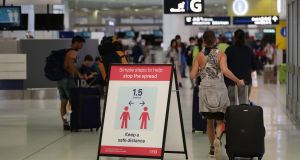 I have just won a clean sweep in a two-test series.

Those pesky New Zealanders remain tricky opponents but in these last two tests I was up against a lethal adversary.

Fourteen days ago, after an overly long seven-month absence from my family, I flew back into Australia.

I was greeted at Sydney airport by wonderful nurses, soldiers and police. They were polite, brilliantly organised and highly efficient. Then, with the greatest of courtesy, they locked me in a hotel room for 14 days.

I knew that for returning expatriates, two weeks of hotel isolation was the policy. I had prepared for this reality by lovingly wrapping some bottles of good French red wine and a few blocks of chocolate among my T-shirts.

I am very fortunate that I do not suffer from mental illnesses such as depression or anxiety, but if you did, this is not the place to be.

There are no visitors, no balconies, no open windows, no sunlight and no leaving the room. It is a highly comfortable prison cell with no exercise yard.

On day two of isolation, there was a knock on the door that revealed a doctor and nurse, both wearing full medical protective kit.

This was my first test.

The doctor produced a swab that was about 15 centimetres long and explained he was going to put that long skinny monster up my nose.

I feebly told to him that my poor old bugle had been broken several times and I had trouble breathing through its many twists and turns. I was not so sure that poker in his hands would find a way through the maze in my nasal canal.

Like a true professional, the doctor was silent, but he gave me a look that said, ‘Bad luck mate. You’re getting this up your nose whether you like it or not’. If you can imagine a wooden broom handle being jammed down the drain in your kitchen sink, with the aim of forcing the rigid broom through the “S” bend in the pipe, then you will have a vivid picture of what the good doctor was trying to do to my nose.

After hitting several dead ends, the swab found its way through the inner twists of my nasal cavity and the tip of the swab seemingly travelling on to tickle the base of my brain’s frontal lobe.

The doctor retrieved the swab, with what I am sure were traces of my brain matter on its tip. The bad news was he wanted to do the same to the other nostril as well. After he repeated that eye-watering experience, I offered my rather insincere thanks and staggered back into splendid isolation, wiping away the tears that a broom handle creates when it’s shoved up your nose.

I was tested twice in the 14 days and happily, both test results show that I do not have the horrid virus.

Unlike the people of Melbourne, who are once again in lockdown after experiencing a second wave of Covid. Melbourne’s sports-mad public suffered the indignation of watching their rugby, AFL, Rugby League and soccer teams all become sporting refugees and flee north, to base themselves in either Queensland or New South Wales. This was to avoid any players from becoming infected by the virus, which would force their respective competitions to be halted.

The drastic shift in our sporting parameters is personified by the plight of the 19-year-old Samoan-Australian Rugby League player, Stefano Utoikamanu, who made his debut for the Parramatta Eels in the NRL last Sunday. After the game he excitedly ran over to the fence to greet his delighted parents and family. It was beautiful to watch his familiy’s tears of pride as they all hugged and kissed him.

Sadly, any physical contact with anyone outside the playing zone breaches the strict quarantine protocols that the players must follow. By hugging his family Stefano broke the rules. After leaving his family, Stefano then went back into the dressingroom with his team-mates, unknowingly putting his entire organisation at risk of cross-infection and a possible enforced 14-day period of isolation.

Australian football’s administrators are in a constant state of crisis management as they navigate this most unpredictable of environments, all within a single national border.

Rugby’s pan-European competitions, such as the Pro 14, the Heineken Cup and the Six Nations conduct matches across multiple countries, all of whom have much higher rates of Covid-19 infection than Australia.

Recent reports from the BBC describe the pitiful state of a medical system close to collapse in the South African city of Port Elizabeth, the home of the Southern Kings. As the virus rips across South Africa, the participation of the Kings and the Cheetahs in the Pro 14 is highly problematic.

All this must give the minds of even the bravest of rugby administrators great unease.

Until a vaccine is produced all sporting competitions, including rugby, that involve international travel, will put the health of those who travel at risk. In turn, this will put the communities they return to at risk.

The governments of the Six Nations countries are all still struggling to control the ferocious virus. European rugby faces the grave challenge of recommencing multinational competitions and keeping both the players and their local community safe.