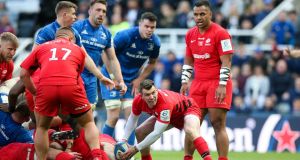 Leinster will get the Heineken Champions Cup quarter-final weekend underway when they take on defending champions Saracens at the Aviva stadium on Saturday, September 19th. The meeting of last year’s finalists will kick-off at 3pm.

The all-French last-eight clash between Clermont Auvergne and Racing 92 will kick-off 1t 6.30pm (5.30pm Irish) at the Stade Marcel-Michelin. Both of Saturday’s games will be shown on BT Sport.

Ulster’s face a daunting trip to take on Toulouse, with the game starting at 1.30pm local time (12.30pm Irish time) on Sunday. As well as BT Sport, the game will also be shown live on Virgin Media and Channel 4.

The quarter-final weekend concludes with the all-English clash of Exeter Chiefs and Northampton Saints at Sandy Park at 5.30pm on Sunday.

All matches will be subject to government guidelines and/or restrictions.