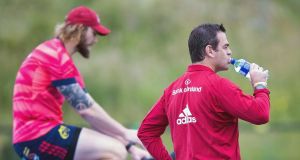 Watching on as other sports return to action and ever mindful of the precautions which need to be taken amid the risk of a second spike of the Covid-19 virus, Johann van Graan has admitted these are anxious times for rugby in advance of its much coveted return on August 22nd.

“Every day is a nervous day, there’s not really a lot that we can control on the outside. All we can do is control what we can, that’s looking after our people, training away and adapting and embracing the change.

“We are all aiming for that August 2nd date,” he added in anticipation of the projected Pro14 game between Leinster and Munster in the Aviva Stadium. “Everyone would play tomorrow if we could. We’re all missing the thing that binds us together, which is the game of rugby.

“No one knows what will happen in the coming weeks. We’ll just take it day by day. Luckily it’s something we’ve been doing all along, focusing on today. We just hope we can all keep to Government guidelines and keep everyone safe and fit, so that we can play a game of rugby again.”

The enforced lockdown has forced everybody to press pause and re-evaluate, and the Munster head coach admits he’s learned plenty about himself over the last three and a half months.

“Individually, I read a lot over the past month and listened to a lot of things. The first thing I read that really struck home was in any crisis you go through three different stages; first fear, second learning, third growth.”

“I challenged myself to learn and grow as much as I can in this time. You ask yourself why you do things in life and in all parts of what you do, where can you improve and what more can you learn.

“My mind has always been about learning and growth, so it’s been a fascinating experience for me personally. In terms of the management and players, we’ve all learnt and grown. I can’t tell you the amount of players who have said they’ve spent time thinking about their careers, the way they play the game. Players have set goals and some have not achieved them.”

“This time has given all of us time to refocus our thoughts and priorities. Not only in our personal lives, but also as a team. Within that team, there’s a whole lot of different role players. In terms of the club, and all sporting teams, you’ve had to redefine what you do and why you do it.”

“The medical team came to the fore in terms of what they had to go through every day. The athletic performance department because all of a sudden you had a 2km radius and guys trying to keep fit. Some on a farm, some only had their own back yard to train. We had to be creative to try and pull everybody along the way.”

He’s been behind a window and a wall, so that was a pretty strange start.

Another thing he’s learnt is that “nobody knows the future when trying to predict that. Every day there are still changes happening, I’m sure a lot will change in the coming months and years because we are still dealing with a pandemic across the world and nobody really knows. I’ve learnt so much.”

Van Graan is eagerly anticipating the squad returning fully to training on Monday week, July 27th after taking a nine-day break from tomorrow prior to their games against Leinster and Connacht, with which they can secure a semi-final in the 2019-20 Pro14.

“There is a Pro14 to finish but we see that as the first competition that we are playing in the coming year. We’ve got two rounds of games to go and if we are good enough we’ll qualify for the semi-final and then there’s a semi-final and potentially a final. So that’s the way we’ve looked at it.”

The restrictions heretofore in place have made for a surreal start at Munster for their quartet of new signings, the South African World Cup winners Damian de Allende, RG Snyman, the former Saracens fullback Matt Gallagher and the ex-Leinster prop Roman Salanoa.

“Damian, RG, Matt and Roman haven’t actually even met all of the squad because we’ve been in smaller groups. Guys are meeting each other over Zoom and over Microsoft teams.

“When Damian came in he was in isolation for two weeks. He’s coming in from Japan, so you are bringing him food and looking after him. He’s been behind a window and a wall, so (that was) a pretty strange start.

“When RG and his wife came, similarly from Japan, they went into their home and there’s a wattbike and some weights waiting for him, and a piece of grass, and they just entered a home that’s so new to them.

“Similarly with Roman (Salanoa), he came up the highway from Dublin and a nice story about Roman. He’s staying close to the Shannon river and he asked me is it okay if he can swim in there. I said: ‘You’re very welcome but absolutely not, it’s too cold.’ But he’s adapted very well.

“Then Matt (Gallagher) obviously making the trip across from England. All four have settled in well and I think we’ll only see what they’ll bring from a rugby point of view in the coming weeks.

“Everybody knows the ambition and the dreams we have as a club and I think it’s important to know that if you look at the four individuals, they all come from championship-winning teams and that’s something that we want to become and in our recruitment it’s very important for me to get those players in to add to what we have at Munster Rugby.

Munster will have virtually a full squad to choose from for those opening games.

“That will hopefully come in time but in terms of what they can add right now is adding in small groups and hopefully being fit for that first game because the only thing we’re aiming for is that first game, to literally get back onto the pitch and play a game of rugby.”

Munster will have virtually a full squad to choose from for those opening games, save for Joey Carbery, as van Graan confirmed that Tadhg Beirne is on course to be fully fit by then as he completes his recovery from the fractured ankle he sustained in the Heineken Champions Cup defeat away to Saracens last December.

“Tadhg’s looking incredibly well. Because he had a leg injury, he’s been able to work on his upper body strength so he’s in phenomenal condition. He’s still with the rehab group and he’ll re-join the squad on July 27th. He’s got to come through his rugby training, but if all goes to plan I envisage he’ll be available for selection on August 22nd.”