Lions tour holding its dates in 2021 will delay global calendar 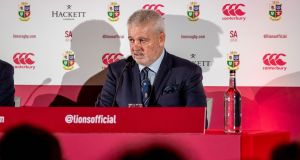 One of the immediate effects of the Lions confirming that next year’s tour of South Africa will go ahead as scheduled in July and August is that it ends any possibility of a global calendar coming into being in 2021.

World Rugby have been hosting forums involving all stakeholders in a bid to agree upon a globally aligned calendar, although the French and English clubs will hardly agree to further defer the start of their next campaigns after five months without matches due to the coronavirus pandemic, nor switch to summer rugby.

Even so, one of the scenarios for a global season would have been to start the two seasons in January, with no overlapping of tournaments in the two hemispheres, and which in turn would have pushed the Lions tour back to the autumn of 2021.

However, with 30,000 supporters expected to take in some or all of the tour, depending upon the degree to which the Covid-19 pandemic has been brought under control and on travel restrictions being lifted by then, the four home unions felt compelled to confirm the schedule now.

“An enormous amount of planning, especially from a logistical perspective, goes into putting on a Lions series, so it was crucial that a decision was agreed upon in good time,” said Ben Calveley, the managing director of the British and Irish Lions. “I am particularly pleased that we are able to provide some clarity for all those Lions supporters eager to travel to South Africa next summer.”

The schedule, first published in early December last year, remains unchanged. Although it will last six weeks, akin to the last three Lions tours, there will only be eight matches compared to 10 in the three previous tours.

This will be the seventh Lions tour since the game turned professional 25 years ago and the fifth time they will be hosted by the reigning world champions. As on the previous two occasions touring South Africa, the Springboks are the newly crowned World Cup winners.

The Lions won the 1997 series 2-1, which was only the third time that a touring side had won a Test series in South Africa – the others being the 1974 Lions and the 1996 All Blacks. Since 1997 the Lions have only won one other Test series, against Australia in 2013, although they did draw the 2017 series in New Zealand, then back-to-back world champions.

This tour may not have the same array of high-class opponents as was the case three years ago and is the poorer for that on a number of levels. It may also provide further difficulties for Warren Gatland, head coach for a third Lions tour in succession.

In addition to three Tests against the All Blacks, the Lions faced the New Zealand Maori and all five Super Rugby teams for the first time ever in that 10-match tour and Gatland was proved right in always maintaining such a demanding itinerary would actually serve to better prepare the tourists for the Test series.

This time the Lions will only face three of the South African Super Rugby sides, and for the first time ever there will be no midweek games in any of the three Test weeks. Indeed the inclusion of just two midweek games, and undistinguished looking ones at that, diminishes one of the time-honoured and unique characteristics of Lions tours.

That will also reduce the opportunities for players to stake their Test claims and make for a long last three weeks, which in turn will test the management’s ability to maintain a harmonious and united squad.

And what kind of condition will some of the Lions’ likeliest players be in by then?

For after the famine comes the feast. Following on from a five-month hiatus between games, with the Premiership scheduled to restart on August 14th and the Pro14 a week later, and the Lions third Test against the Springboks in Johannesburg on August 7th next year, some frontline international players are looking at the prospect of a year-long ‘season’ per se.

As ever, the English clubs have been spectacularly unhelpful by refusing to move their 2020-21 Premiership final from its date of June 27th, which is one week before the Lions’ tour opener on July 3rd against the Stormers in Cape Town. By contrast, the Pro 14 complied with the Lions’ request by moving their final forward to June 19th, 2021.

The Lions were hoping to have an unfettered two-week lead-in to that opening game with their entire squad, and are also looking at adding a pre-tour warm-up game along the lines of the one against Argentina in Cardiff in 2005, rumoured to be at Twickenham or Murrayfield, and potentially against Japan.

The timing of the Premiership final will also compromise the preparations of any players involved in the Twickenham decider who have been picked in the Lions squad.

Confirmation of the Lions schedule also ensures the tour will unfortunately clash with the Tokyo Olympics, which has also been postponed for a year. As would have been the case with the original scheduling of both sports events in 2020, the Olympics will run over the same three weekends as the Lions’ three Test matches.