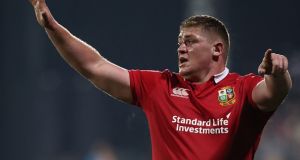 The Lions have announced the itinerary for their shortest ever tour. File photograph: Getty Images

The British and Irish Lions will begin their eight-match tour to South Africa in the summer next year, ending any prospect of a global calendar starting in January.

The Lions has announced the itinerary for their shortest ever tour containing only two midweek fixtures with the three Tests played in one block from July 24th, unable to wait any longer for talks over a global calendar to turn into action.

One proposal was for the global season to start in January and align the seasons in the two hemispheres with no overlapping of tournaments. It would have pushed the Lions tour back to September, but the four home unions acted now with 30,000 supporters expected to fly out for all or part of the tour.

The Olympic Games in Tokyo run from July 23rd to August 8th, but SA Rugby have previously played down the significance of the clash.

“An enormous amount of planning, especially from a logistical perspective, goes into putting on a Lions series, so it was crucial that a decision was agreed upon in good time,” said Ben Calveley, the managing director of the British and Irish Lions. “I am particularly pleased that we are able to provide some clarity for all those Lions supporters eager to travel to South Africa next summer.”

The tour will start on July against the Stormers at Cape Town Stadium, the venue for the second Test. The Sharks and the Bulls provide the opposition for the other Saturday fixtures ahead of the Test series with an Invitational XV and South Africa A providing the midweek matches.

The first and third Tests will be played at altitude in Johannesburg at the FNB Stadium and the Emirates Airline Park respectively. The small number of warm-up matches and the likely inferior nature of the midweek opponents will make it difficult for players to compete for a place in the side in the first Test on an equal footing.

With the Gallagher Premiership and Guinness Pro14 seasons starting late because of the coronavirus lockdown, some Lions players will have no break before the start of the tour. Those taking part in league play-off matches would be vulnerable were they required to quarantine for two weeks on arrival in South Africa where the virus is not expected to reach its peak until November.

“The Covid-19 pandemic has caused a lot of disruption to the sporting calendar, but after extensive discussions we are now able to confirm that the tour dates are as previously announced,” said Calveley.

Warren Gatland will be the head coach for the third successive tour and has not lost a Test series. The tight schedule, even more than South Africa’s World Cup victory last year, promises to make it his toughest assignment.

Sligo v Waterford postponed due to player’s Covid-19 symptoms 11:34
Ronnie O’Sullivan records fastest win in Crucible history 12:05
Justin Thomas takes world No1 with victory in Memphis 09:06
The Offload: Schools rugby talk in the Seanad appears tone deaf 09:00
All in the Game: Klopp gets the last laugh in quiz show 09:00
Crossword Get access to over 6,000 interactive crosswords