Jordan Larmour aiming to take his game to the next level

Under the new Ireland management team, contenders are eyeing up fresh opportunities 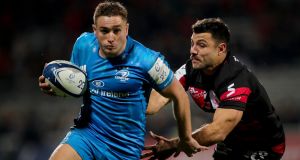 Jordan Larmour: “The more game time you get in a certain position, you will feel more comfortable.” Photograph: Oisín Keniry/Inpho

As soon as James Ryan precociously appeared fully formed as an international lock, he had barely two seasons before the question was being asked about who the next James Ryan would be.

Jordan Larmour, now more than a neophyte but still in the Leinster default position of a dog-eat-dog scrap for the Leinster fullback shirt, might have thought he had emerged from the veteran Rob Kearney’s shadow only to find Ulster’s Will Addison there to cast another. Yes, yes Jacob Stockdale and Andrew Conway could have a say too.

With Joey Carbery injured and Johnny Sexton struggling to be fit for Ireland’s opening Six Nations match against Scotland, Ross Byrne or Billy Burns might come into the equation with John Cooney also shouting from the roof tops to be given a chance at scrumhalf.

Caolin Blade, the Connacht scrumhalf, will also force choices. But what is the chance of Addison at fullback with Cooney and Burns the halfback pairing in an Irish set up.

With the new mindset of Andy Farrell and Mike Catt now in place along with Stuart Lancaster as a positive driving force in the club that provides most players, the beginning of 2020 is shaping up to become a year of changing faces.

Ryan Baird, who replaced the injured James Ryan after 23 minutes as Leinster forced a 50-point fracture in Connacht last week is another joining a disorderly queue to get noticed, Caelen Doris, Max Deegan and Will Connors all knocking lumps off each other into Farrell’s thinking.

Is Baird a James Ryan 2.0 (a second major version of somebody or something) Larmour was asked this week.

“I don’t know,” replied the Leinster back.

“They are quite similar, the way they play and the way they work around the park. What they bring is physicality. They get off the line and they hit people. They make a mess of the ruck for the opposition so that’s what we’re looking for. Having the likes of those two is very good for us.”

The 27-year-old Addison impressed in Ulster’s recent interprovincial wins over Connacht and Munster after returning from a four-match ban for a dangerous tackle in his side’s home win over Clermont. His challenge now is to remain injury free. Ulster continuing to perform strongly at European level will help.

But Larmour is nothing if not fully aware and refuses to paint himself into a corner. His demands for self-improvement are all-encompassing.

“A lot of things I suppose,” he says of what needs to be better.

“Backfield cover; if someone kicks not letting the ball bounce. Defensive reads: getting in a good position to make a hit. High ball and handling just working on all those skills. The more game time you get in a certain position, you will feel more comfortable. Still, I can play on the wing. I can go enter the centre if I have to. So, it’s just important I don’t take away from that.”

Addison, like Larmour, is not a player content to sit deep in the back field. Both have the skill and composure to set defences with their runs. There is a hunger to become involved and play to what they believe their strengths are to the team rather than conservatively service the position with basic play.

To that end Larmour has been popping up as a first receiver and it chimes with what Leinster prop Cian Healy spoke about earlier this week about younger players coming through, who are now unafraid to speak their minds and volunteer informed opinions.

“It’s a bit of Stuart and it’s a bit of me,” says Larmour about the change in emphasis. “When I came back, I sat down with him and I said I want to step up and be more of a ball player as well so I’m kind of working on that.

“I’ve done it a few times this season, kinda stepping up. It’s important, being a 15, you’ve got to be able to play a two-sided attack so when you’re getting back up off the ground, you’re scanning, seeing if you can go back down the short side or work out the open side.

“You have to scan up and see where the space is, and play the space. But it’s something I’m conscious of and continuing to work on, scanning and seeing the spaces, and stepping up, and how do we get the ball to the space.”

Over Christmas there was a new vibe in the Irish camp. It was Farrell’s first session with a new squad and accompanied by the energy-giving extrovert Mike Catt after his four years in Italy with Conor O’Shea.

The Irish set-up has moved to Abbotstown where the growing Sport Ireland Campus is part of a changing landscape and where some of the Irish squad met each other for the first time outside of match days.

They had dinner together and then went carol singing to College Green in Dublin city in aid of the charity Focus Ireland. Many of them see the post-Joe Schmidt era and post-World Cup time as a natural pause, a clear opportunity for change, or at least a greater openness to new faces.

“Stu has a different style, Faz does and so does Joe,” says a pragmatic Larmour.

In 23 days in the Aviva Stadium, we’ll know something more about what style.

Jack Grealish needs to show that his remorse is real this time 12:13
Tottenham give 550 non-playing staff a 20 per cent pay cut 12:14
Sky Sports customers save on bills; rule changes could change rugby utterly 07:25
Uefa meet to re-evaluate hopes of finishing current season 06:48
Gerry Thornley: Changes to tackle laws could transform rugby by time of next World Cup 07:18
Here is your handy guide to sport on television this week