Alain Rolland to step down from World Rugby position 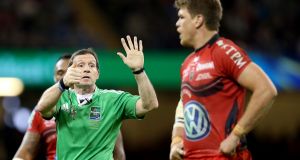 Alain Rolland is to step down as World Rugby’s high-performance 15s match officials’ manager after just over four years in the role. The Irish Times has learned that World Rugby will confirm that former Leinster and Irish scrumhalf, who had a distinguished career as a Test match referee, will move on from his role imminently.

Rolland has confirmed his intentions to step down from what is a highly demanding role which, until the Covid-19 pandemic, involved an inordinate amount of travel and time away from his family. However, the specific reasons for this development, after a relative short period in a position which requires long-term planning, remain unclear.

World Rugby is as much a politicised organisation as it is a business or even a sporting body, and for one individual to oversee the entire 15-a-side game is also a high-wire balancing act, given the constant divide between the two hemispheres. And anybody who has been both a long-serving Test match referee and then World Rugby’s referees’ chief is hardly to have won favour with everybody.

In the heel of the hunt, both Rolland and his predecessor Joel Jutge have stepped down after just one World Cup cycle apiece, yet both seemed perfectly suited to longer stints in the job, which begs one to ask is it simply too onerous a responsibility?

Given Rolland succeeded Jutge, who in turn had followed the New Zealander Paddy O’Brien, the likelihood is that the role may now revert to someone in the southern hemisphere. That is if World Rugby continue with the same structure atop global refereeing.

Having previously worked as a mortgage broker in Dublin, Rolland then set up his own consultancy business and may now revert to that. But this latest development seems set to end practically a lifetime of significant involvement in the game.

Although he is more widely known as a referee, Rolland had a a fine playing career.

Like most scrumhalves he was always fairly lippy and so, while it was uncommon for former players to take to refereeing, it probably wouldn’t have surprised referees of his generation.

He refereed at Test level from 2001 to 2014, the high point being when he took charge of the final of the 2007 Rugby World Cup. He was also an assistant referee in the final of the 2011 Rugby World Cup and refereed three Heineken Cup finals, in 2004, 2013 an 2014, a figure that would have been higher but for Munster and Leinster competing in six finals during his career.