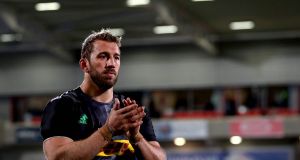 Robshaw announced on Monday that he would leave Harlequins at the end of the season and Rugby United New York co-owner James Kennedy told the Guardian: “I’d love to sign him, he’s playing out of his skin.”

The Harlequins flanker, 33, will land in New York on Tuesday and attend RUNY practice in Staten Island, Kennedy said, taking the ferry and shuttle bus like the rest of the squad. Robshaw will be interviewed by head coach Greg McWilliams and his forwards coach, the former Wasps lock Marty Veale.

“The coaches have to sign off,” Kennedy said, adding that a Robshaw signing for 2021, the fourth season of MLR, would likely be of benefit to RUNY off the field as well as on it, in terms of ticket sales and supporter awareness in the UK as well as the US.

Robshaw is due to attend a fan event on Wednesday night at the Pig & Whistle, a rugby pub in Midtown Manhattan.

“He wants to come here,” Kennedy said. “It’s a punt, and he could go to Japan or spend a year in France. But he’s a well-respected guy and he wants to come to MLR.”

Robshaw won 66 caps for England, the last in June 2018. He captained his country 43 times and at the 2015 Rugby World Cup. He has spent 16 years, his entire senior career, at Harlequins.

“I could never have imagined I would be fortunate enough to play for the team I admired the most,” he said as his Harlequins exit was announced.

“Though there is so much I will miss about playing for this team, I will always be eternally grateful and proud for having had the chance to stand alongside such extraordinary players.”

The money on offer in MLR is small – the top player salary is $45,000 – but the profile of the league is growing and a number of internationals have landed in the 12-team league.

Foden, a former England full-back, has played one season of a two-year deal while Bastareaud, a France centre, has trained with the team and played pre-season games this year. Mitchell, a Wallaby wing, has signed to play this season.

Elsewhere, the All Black centre Ma’a Nonu has signed for San Diego Legion and the Springboks prop Tendai Mtawarira is one his way to Old Glory DC, one of three expansion teams in MLR season three. The Colorado Raptors have signed the All Black wing Rene Ranger.

He also confirmed reports that he is due to meet the former Ireland and Lions wing Simon Zebo, but not until March.

MLR’s third season kicks off this weekend with a full slate of games, among them RUNY’s opener against the New England Free Jacks at Sam Boyd Stadium in Las Vegas. Four more games will be played in Sin City on the following weekend.

The Seattle Seawolves have won both MLR titles so far, beating the Raptors in the first final in 2018 and San Diego in the championship game last year. - Guardian