‘It is a disappointing place to be in but ... I am not in position to comment any more’ 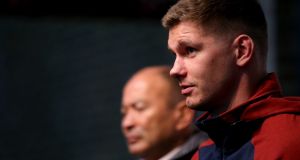 The 2020 Six Nations launch had a new premises in the Tobacco Dock in London’s East End, once a warehouse and distribution centre for importing tobacco – mostly from north America. It’s freshness was augmented by the presence of four new head coaches and four new captains, but the elephant in the room was all things Saracens.

Hence, it was inevitable that it would be a recurring line of questioning, not least when one of the two retained captains, Owen Farrell, was presented to the media for the first time since the club accepted relegation from the Premiership rather than have their accounts independently audited. In fact, the England captain didn’t even wait for the subject to be brought up. He knew it was coming anyway.

“Just before we start, I just want to address the Saracens situation before we get into the interviews. Obviously, it is a disappointing place to be in but . . . I am not in position to comment any more.”

No way was it going to be left there and Farrell was asked if the saga could be parked completely within the England squad.

The English squad, who will not be far from Ireland’s base in the Algarve next week, have yet to begin their Six Nations preparations, so Farrell was also being truthful if surprisingly honest when asked if it could affect their cohesion.

“I don’t know,” he admitted. “When we get together it will be clear, because we are very good at being honest and open about stuff, getting stuff out there and sorting things out if we need to. We will see if we need to.”

As to how the players might deal with the issue, Farrell said: “There’s ideas but nothing set in stone. Still pretty soon. Everyone has come away with an idea but again we are not going to comment on it because nothing is sorted yet.

“We have got an idea so we are happy with that idea to then come into camp and park it and get on with what is a massive tournament for us.

It was surprising that Eddie Jones, sitting and smiling alongside Farrell, allowed this line of questioning to persist even that long before interrupting: “Is anyone interested in talking about rugby . . . if you want to talk about Saracens I will get my Saracens tie on.”

The Saracens question even kick-started the French press conference, at which Fabien Galthie – looking every inch the newly installed head coach of Les Bleus in wearing white sneakers with his official French blue suit and, when away from press conferences black, thick-rimmed glassed – responded with his best Gallic shrug.

No they had not discussed the issue within the French squad, although he noted it was quite a topic of conversation at the launch.

Of course, the likely exodus of many Saracens players could have implications for the Top 14 too, if only for a season-long loan at the minimum and quite possibly to French clubs given English clubs won’t be able to afford them in several instances given their willingness to stay within the Premiership salary cap.

Otherwise busy with familiarising himself with the Welsh coaches and players, the newly installed Wayne Pivac said: “We have really just watched that [Saracens] from afar. I really do not have any comment other than the two guys we have. Rhys Carre and Nick Tompkins have been training with us, training well and I think Rhys goes back for a catch-up with the club and Nick goes back after training today. Yes, I do not have a lot of information to be honest.”

But he also welcomed the possibility of those two players joining Welsh regions. “Certainly that can be an option and if that is the case we would embrace that, the more of our players playing in Wales works for us. Certainly I would not be opposed to that.”

Invariably, not only as a former Saracens player and coach but as the father of the English captain, Andy Farrell was asked if he’d any conversations with his son about the recent developments at the club.

“Yeah, I’ve managed to chat to him . . . but all you can do as a parent is support and offer your advice along the way. I suppose he’s got a lot of Saracens questions being thrown his way himself, so I suppose he’s been trying to bat those away a little bit. He’s in a good place because he’s here. He’s in international rugby which is a completely different place . . . He’s got a massive challenge ahead of him himself, exactly the same position as Johnny now and that’s all he’ll be thinking about, captaining his country.”

Significantly though, Farrell also suggested Jones would use Saracens’ problems to galvanise England.

“Well, I’d be using the situation if I was Eddie and Eddie’s not stupid.”