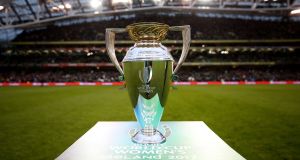 As the 12 teams gather for their final preparations in Dublin and Belfast, World Rugby have warned that the Women’s Rugby World Cup 2017 in Ireland will be the most tested of any to date with the use of traditional ways of collection as well as intelligent testing.

In the 2014 tournament in France anti-doping bodies conducted 122 tests, which returned no adverse findings.

The last two men’s World Cups in New Zealand and England also returned zero adverse findings raising questions about the effectiveness of the regime as the only players getting caught are at the fringes of the sport at the lower levels.

World Rugby believe their education of players at all levels, the testing strategy and the culture of the sport has played a part in no lasting scandals emerging.

The comprehensive programme for this World Cup which begins on Wednesday has included pre-tournament testing as well as in and out-of-competition tests.

It is being run in partnership with the Irish Sports Council and a WADA-accredited laboratory in Lausanne, Switzerland.

World Rugby (WR) will not disclose how many tests they will conduct in Ireland until after the tournament is over, although a spokesperson said the number will be greater than in 2014.

“It is anticipated that 2017 will be the most-tested Women’s Rugby World Cup to date. However, it’s not just about the number of tests,” said the WR spokesperson.

“It’s about how intelligent that testing is. So I would also say that the testing programme for WRWC 2017 will be the most intelligent and targeted to date.”

Of those 47 per cent were subjected to additional analysis and cases were completed for nine anti-doping violations.

The intelligent system involves strategic long-term storage of samples providing opportunities for future re-analysis and features a more than 3:1 proportion of out-of-competition versus in-competition testing.

Prior to the last World Cup players were shown a moving video featuring former Scotland Under-20 player Sam Chalmers.

Chalmers tested positive for a banned substance in the run up to the 2013 IRB Junior World Championship and was banned for two years.The full-back went on to tell his story to other players to encourage them to ‘Keep Rugby Clean’.

Last week John Treacy, chief executive of Sport Ireland, said the rugby was considered a “high risk” sport and placed along cycling and his own sport of athletics.

“We generally view sports as high risk, which are generally athletics and cycling, and rugby would be somewhat high-risk as well,” said Treacy.

Treacy also added that the IRFU run a user-pay system in Ireland, which means the sport pays for much of its own testing around the country.

Match day three in Ireland (August 17th) will be Keep Rugby Clean day with players participating in a number of activities and promotions highlighting the importance of keeping the game drug free.