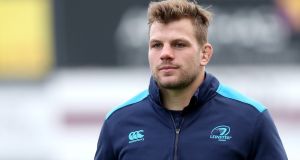 Ulster have confirmed the signing of Jordi Murphy from Leinster on a two-year deal, as reported in The Irish Times on Tuesday.

Murphy will leave Leinster at the end of the season and move north to link up with the squad which also includes Marty Moore after his signing was confirmed last month.

“It’s been an incredibly hard decision to leave Leinster, where I have made some great friends and enjoyed some fantastic times, but I am excited by the prospect of moving north and linking up with some familiar faces,” the backrow said.

“Having considered my options at length, I realise that this represents a great opportunity for me to challenge for a position at Ulster and hopefully become a more regular feature in the national set-up.

“Ulster is building a strong squad for next season and I’m really looking forward to the new challenge. However, I am fully focused on contributing as best I can for Leinster for the remainder of the current campaign.”

Murphy, who made 95 appearances for Leinster, will link up with forwards coach Jono Gibbes – who he worked under previously at Leinster – and Les Kiss, who he was also coached by.

Murphy scored his 17th Leinster try in last Saturday’s win away to Benetton, but with the array of backrow options at Leinster, Murphy’s move will assuredly be endorsed by Joe Schmidt and demonstrates his desire to further his international career. His mobility, athleticism, running lines and versatility will also be a welcome addition to Ulster’s ranks.

Commenting on the move, Kiss said: “Jordi has been on our radar for the past 12 months and it took a lot of hard work between his agent and Bryn (Cunningam, Operations Director, Ulster Rugby) to get this completed. Unsurprisingly, there was a lot of interest in Jordi and we are really pleased that he has chosen to ply his trade here in Belfast.

“The acquisition of Jordi for next season is great news for everyone connected with Ulster Rugby and I believe this move will greatly benefit both parties.

“He’s an extremely talented player; an explosive runner and a nuisance at the breakdown, while his versatility allows him to play across the back row. At 26 years of age, we believe Jordi has the potential to play the best rugby of his career at Ulster and that is a hugely exciting prospect.

“As injuries are becoming increasingly common in the modern game, it’s imperative that we continue to expand the playing resources we have available. With Marty (Moore) also on board, plus the return to fitness of Marcell Coetzee, we have added some much-needed depth to our pack for next season.

“The increased investment in our Academy forwards is starting to pay off and five of those in our current system – Nick Timoney, Adam McBurney, Aaron Hall, Greg Jones and Matthew Dalton – have played for the senior team already this season. That’s another positive sign for the future of rugby in Ulster.”