Jordi Murphy to swap Leinster for Ulster next season 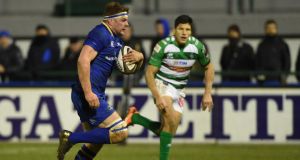 Jordi Murphy will leave Leinster at the end of the season to join Ulster. The Irish Times has learned that the 26-year-old backrow will end a seven-year association with the province and, as with the Ulster-bound former Leinster tighthead prop, Marty Moore, link up again with the northern squad’s forwards’ coach Jono Gibbes.

Gibbes was Leinster’s forwards coach for six seasons, during which time they won their three Heineken Cups, and Murphy, who made the first of 95 appearances for Leinster against Glasgow in September 2011, was coached by the Kiwi for his first three seasons in the Leinster set-up. He was also coached by Les Kiss when the Ulster director of rugby worked as Ireland’s defensive coach.

This culminated in something of a breakthrough campaign for Murphy in the 2013-14 season, when he scored eight tries in 21 games and having represented Ireland at Under-18, Under-19 and Under-20 levels, he also made his Irish debut in the Six Nations away to England. His career continued on an upward trajectory in the next two seasons, and he played in all five of Ireland’s games in the 2016 Six Nations.

However, after scoring the opening try in Ireland’s historic win over the All Blacks in Chicago, he suffered damage to his anterior cruciate ligament, which ended his season. Over 10 months on, he returned for Leinster’s game away to the Southern Kings but was left on the bench for the games against Munster and Montpellier, before missing out altogether in the European Cup win away to Glasgow.

Murphy initially also failed to make the original 38-man squad for the November international series, although injuries to Dan Leavy and Tommy O’Donnell saw him called up as a late addition and he bridged a gap of 54 weeks at test level when winning his 18th cap against Fiji.

Murphy scored his 17th Leinster try in last Saturday’s win away to Benetton, but with the array of backrow options at Leinster, Murphy’s move will assuredly be endorsed by Joe Schmidt and demonstrates his desire to further his international career. His mobility, athleticism, running lines and versatility will also be a welcome addition to Ulster’s ranks.

Even without the injured Jamie Heaslip, Leavy’s return from injury means Murphy is one of six Irish international backrows competing for places in the squad to face Exeter in the first of their back-to-back meetings with the English champions and Premiership pacesetters in Sandy Park on Sunday.

Leinster also expect to have Robbie Henshaw and James Ryan back this week, as well as returning internationals such as Johnny Sexton. Although Joey Carbery and Barry Daly are still sidelined, the man of the match debut by James Lowe on Saturday leaves their coaching staff with the task of picking three outside backs from eight players.

“It’s a selection headache for once,” admitted backs’ coach Girvan Dempsey. “For a while there, sessions-wise, we didn’t have two full backlines because we’d so many injuries in the backs - Leo was going: ‘They’re a protected species, relax, we can’t work them too hard because we’re breaking down.’ Thankfully now the timing has come around at the right time, we’ve got near a full-deck. It’s brilliant.”

“That’s the reality, there are going to be some guys who are going to be disappointed. With the squad we have, the rotation we have, it’s horses for courses sometimes in terms of guys for different games and we may look at that as a similar option again.”

Lowe will be registered in Leinster’s European Champions Cup squad by today’s midday deadline, and Dempsey said of the former Chiefs and Maori winger: “Leo’s had numerous conversations with him regularly over the time. Then, there is relocation. We’ve got some really good guys behind the scenes, who support in terms of finding a house. Just seeing was he happy as a bloke, is he fitting in.

“He’s full of energy, absolutely full of energy. He just bounces into the place in the morning and just loves the game. He loves training, he’s vocal in meetings, he’s happy to share and he’s settled in really well. It’s brilliant, he’s a great addition to our squad. He has settled in really well. He is one of the guys straight away, straight into the dressing-room singing a song after his first cap.”

Apparently Lowe sang ‘Colt 45’, a rap single by Afroman. Lowe’s eagerness to go looking for the ball was vividly on display in addition to his two smart finishes, and Dempsey said: “Yeah, he is mad keen. He doesn’t want to be pigeon-holed. He wants to be involved in the game. He wants to get his hands on the ball.”

Whether Lowe is thrown in at the deep end remains to be seen, but either way Dempsey and Leinster are also fully aware of the threat posed by Exeter, who have won their last five games in the Premiership as well as their opening European wins over Glasgow and away to Montpellier. They haven’t lost at Sandy Park since Bordeaux Begles’ won there exactly a year ago.

“They’re a strong group, strong core group of players, very well coached, really clear identity on how they play and defend and they’ve grown that this year. They’ve shown that this year; haven’t been beaten at home (won) 8 out of 10, losses to Gloucester and Leicester. Went down to Montpellier, what a game. They stayed true to their attacking style to get the tries and to get the win down there was massive.

“You look at them against Glasgow and they still have that ability, a strong kicking game and once they win penalties and put you in the corner, they back their maul, they back their forwards to score.”