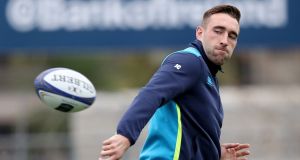 Jack Conan: “Ireland is obviously extremely tough and the standard is so high, it just makes you realise you need to constantly improve.” Photograph: Oisín Keniry/Inpho

Leinster’s meetings with Exeter Chiefs in Sandy Park this Sunday (kick-off 5.30pm, live on BT Sport) and at the Aviva Stadium on Saturday week look like defining their European Champions Cup pool campaign.

And whatever way you look at it, European rugby probably couldn’t throw up more exacting opposition than the high-flying English champions.

In rampant form domestically, and having backed up their Euro strangulation of Glasgow at home away to Montpellier, the Chiefs are on a run of nine straight wins in three competitions.

They have a battery of big carriers, but there the similarity with Montpellier pretty much ends, according to Jack Conan.

“Montpellier are pretty route one, they love to move their big lads around the corner, physically bash into us from the off, whereas when you’re playing Exeter, they play with a lot more substance to their game, a lot more style. They like to play with a huge amount of width and get their wingers involved.

The dynamic Leinster number eight has an eye for the try line, with 16 tries in 61 games for Leinster augmented by four in five Tests for Ireland.

But even he has to doff his cap to Exeter’s number eight , Thomas ‘The Tank Engine’ Waldron. A typically astute Rob Baxter signing from Leicester in 2014, Waldron’s record of 49 tries in 86 games for Exeter is pretty remarkable even allowing for his habit of showing up at the sharp end of their potent mauls.

“That’s pretty good going. He’s someone we’ll have to deal with,” says Conan, who adds: “To be fair to Thomas Waldron, he’s a great player and someone that any number eight can look at. You can appreciate his talents. He’s not physically the biggest player in the world but gets through a huge amount of work and runs some really good lines. He has a great skills set and if he’s picked to play this week, he’s definitely someone we’ll look at shutting down early on and not letting him play with confidence.”

By comparison to the 34-year-old Waldron, Conan only made his first European start in the home win over Montpellier last January, when scoring a hat-trick from blindside flanker, but in the continuing absence of Jamie Heaslip this is set to be his seventh consecutive European start.

With others on Lions duty last summer, the tour to the USA and Japan opened up another door internationally. But the easy-talking and endearingly honest Conan freely admits he would probably have been restricted to one more cap in the November window against Fiji regardless of the cramp which ruled him out of the South Africa game.

He also reveals that Joe Schmidt gave him plenty of work-ons, especially in defence, and as Conan puts it: “To try and get tackle entry, tackle effectiveness. I wouldn’t miss a whole lot of tackles but I could definitely be a bit more effective and make more impact hits. That’s something we spoke about, and my work around the ruck as well.”

Self-critical in any case, the 25-year-old knows it’s something he needs to add to his running and offloading game.

“Ireland is obviously extremely tough and the standard is so high, it just makes you realise you need to constantly improve. Those criticisms, you can’t let it be a deterrent or affect you, take away your confidence or anything like that. It is an opportunity to get better.”

While always liable to come up with big plays, if there has been a flaw in Conan’s game it’s probably been a tendency to drift in and out of matches.

He candidly admits as much.

“I’d be guilty at times of tapping out mentally and just being a bit of a passenger and just watching the game. It’s just concentration, staying in the moment, picking up on cues when tackling players, how they carry the ball, things like that, and just working earlier on getting set and getting off the line, making sure my feet are planted and that I get in a dominant hit. So it’s not this drastic change at all. It’s small things, and staying in the moment for me.”

That said, he also keeps this self-criticism in perspective. “I think switching off in your eyes might be a bit more dramatic. I’m not off with the fairies mid-game or anything like that but there are just moments. It’s 80 minutes and more to keep your concentration, to always be in the moment.”

This, he also concedes, goes back to his school days.

“It’s not something that’s just new. When I was a kid in school, playing for St Gerard’s, I had coaches telling me that I’d come in and out of games and I’ve got drastically better at it since then but playing for St Gerard’s and playing rugby for Ireland, and for Leinster in the Champions Cup, there’s a slight difference in standards,” he notes dryly.

“So even the smallest switch-off, or ‘mental tap-out’ as Joe would say, isn’t good enough. And it’s something I have improved throughout the years, but there’s always room for growth.”