Johann van Graan ready for tough test in weeks ahead 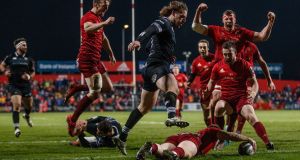 Munster coach Johann van Graan says his new squad will have their depth tested massively over the coming weeks, with just fit loosehead forward available as they prepare for the clashes with Leicester Tigers in the Champions Cup over the next two weekends.

But the second-half injury to loosehead Liam O’Connor dampened the victory, as Dave Kilcoyne looks set to be the only available first option in the number one jersey, with James Cronin also out injured with a calf problem.

“We’re down a lot of injuries. Obviously this is a long term injury, well it looks like a long-term injury to Liam. I don’t want to speculate but we will have to reassess on Monday, do our homework on who is available and who’s not,” said van Graan.

“I thought Brian Scott actually played very very well, he carried the ball and made some good hits but depth will be a problem for us now. But that’s rugby and we’ve got to adapt and make plans and take it as it goes.

“We’ve had so many injuries in the autumn internationals over the last month but we’ll reassess on Monday and see who’s available. I suppose the positive and the opportunity I’d like to see the glass half full is there will be a lot of guys coming back over the next seven to eight weeks, we’ve got big games coming up.

“Every single one is a big one so hopefully we will get a few guys back over the coming weeks as well.”

Saturday’s victory was Munster’s fifth straight league success over Ospreys for the first time in van Graan’s debut game in charge. And he is thrilled to be involved with Munster in a big European week.

“The experience I had at the Racing Metro game was fantastic. Obviously this is the big competition in the world in terms of club rugby, Leicester Tigers are one of the premier clubs in the world so Munster versus Leicester will be massive and I can’t wait to start on Monday morning,” said van Graan.

“I am here to enhance things. We made one or two subtle changes against Ospreys, some things worked very well; we’ve got a lot to work on. Andy Farrell came in and . . . and well done to everybody involved all the coaches and all the players.

The former Springbok assistant watched on last weekend in Munster’s victory away to Zebre while he previously shadowed Rassie Erasmus.

“The whole process worked very well by the IRFU and Munster. We were under pressure for the last two weeks to get results and if we didn’t win there would have been a fair bit of criticism,” said van Graan.

“But well done to all involved . . . they’ve played really well in this transition and hopefully that’s finished now and . . . reassess on Monday morning and start again from zero.”