James Lowe not registered by Leinster for Champions Cup 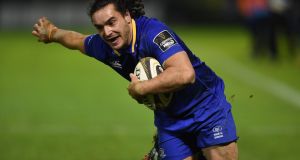 James Lowe scored two tries on his Leinster debut against Benetton but won’t be part of the squad to face Exeter Chiefs. Photograph: Elena Barbini/Inpho

Despite hitting the ground running with his two-try Man of the Match performance in Benetton last Saturday, James Lowe was not after all registered by Leinster with the European Champions Cup organisers, EPRC, by Tuesday’s stipulated mid-day deadline, thus ruling him out of consideration for this Sunday’s match away to the Exeter Chiefs.

Each club may register up to three additional players during the pool stage, including a frontrow player, and each to replace a player previously registered. However, rule 3.7 states: “Each club is permitted a maximum of two ‘non-European players’ in each match squad.”

As things stand, Isa Nacewa is exempted as he has played for Fiji, and all Pacific Island and South African players are amongst those who countries have Association Agreements under various EU legislation regarding trade and free movement of labour.

However, both Leinster’s Australia lock Scott Fardy, and New Zealand scrumhalf Jamison Gibson-Park, fall into the category of non-EU players, and so the Leinster management have clearly taken the view that with both of those players required this weekend, and with innumerable options in the outside three, there’s no need to register Lowe just yet.

Ultimately though, there seems little point in signing a player with such X-factor and not using him in the European Champions Cup in the longer term. Lowe may thus be registered next week in time for the return clash with Exeter in the Aviva Stadium on Saturday week and will assuredly feature before long.

However, Leinster will only be permitted to name two from Fardy, Gibson-Park and Lowe in match-day squads, and the same is true in the Guinness Pro14 as, similarly, their competition stipulates, under rule 6.2: “A maximum of two non-European players are permitted in a Team’s match squad.”