Jenny Murphy ready to tackle whatever comes her way 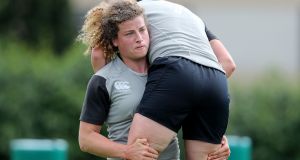 Ireland’s Jenny Murphy and Lindsay Peat during a training routine. “They have some world class players but we know how we can beat them.” Photograph: Dan Sheridan/Inpho

So many inspirational moments on August 5th, 2014. Jenny Murphy owns two of them squeezed into about five seconds. Amiria Rule was the epitome of a Kiwi wrecking ball centre. Ma’a Nonu in female form.

Murphy had been sitting on the bench for 40 minutes. Cold. Angry.

Grace Davitt and Lynne Cantwell being the established Irish midfielders.

The start of the second half saw her aggressively go about her work. New Zealand moved 11-7 in front before Rule came crashing through the middle. Murphy emptied her, leaping up to bury another Black Fern.

The game was already turning Ireland’s way as we witnessed the sort of Murphy physicality only evident on and off in recent seasons due to serious injury but against Australia last week she was handing out the heavy punishment again.

She needed to miss the Japanese match to recover. The 28-year-old almost returned to a World Cup dream in tatters.

But Ireland and Murphy survived. They can’t go on without her.

“I love playing France. ” she beams, making no attempt to hide her delight on the eve of what promises to be a brutal affair.

“Those are the games I like,” she says of the Wallaroos encounter. “It was tough. First big game since England [in March] so it was nice to get some big tackles in early, and a bit late!”

The defensive line speed visibly slowed against Japan. The essential aggression, which Murphy guarantees, absent. The calf slowed her, forced her to rest, but she is ready again.

“Yeah, we pride ourselves on defence, line speed, getting square up on the ball. We didn’t implement that in our first two games and got caught out wide. We have fixed that in training.

“Now we have to put their backline under the pressure. Myself and Sene [Naoupu] want to get those hits in nice and early. We both like that aspect of the game, so if we implement that with some good folding stuff we should be fine.”

All the right noises.

“France let you rate yourself, let you know how good a player you are. They have some world class players but we know how we can beat them, we have a game plan, we just have to go out and do it. It’s going to be fun.

“They are a solid team, nice set piece. But when we are sharp we are capable of dealing with the arsenal of weapons that they have and then some.

“So, a lot of the talk is not about trying to stop France. Yeah, and we will. But we have some stuff that they are going to have to stop too. We are not too worried about them now. We have done the analysis of them and now we are focusing on ourselves.”

A pattern tracks the rise of women’s rugby in Ireland since 2013. They are a team that thrives in adversity. And only so. Australia were leading on the hour mark last week. Claire Molloy’s pack reacted with ruthless intensity. Japan shook their resolve four days later. Exposed the lack of depth in the squad. They survived by staying calm and outlasting them. They have been in the ring with New Zealand, England, France and refused to blink.

Better the opposition the better they tend to be.

“Sometimes one or two ugly wins will do us the world of good. That was our kick up the ass. Look, we know. We have got together and said we know what we are capable of doing. We weren’t happy with some of the performances we put in but we want to go out and show the Dublin crowd what rugby we can play.”

Like when they beat the Black Ferns in Marcoussis on an August day three years ago. That would be something. Only that will be enough.