Women’s RWC: Ireland name their side to face France 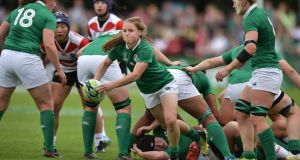 Cronin’s snappy service helped Ireland overcome Japan at the weekend as Ireland came from a 14-0 half-time deficit to secure a 24-14 win and keep Tom Tierney’s side in the tournament.

The UL Bohs number nine will make just her second start for Ireland at the UCD Bowl, keeping the more experienced Larissa Muldoon on the bench.

Claire Molloy, who started at number eight last weekend, reverts to her more familiar openside role as Tierney names his strongest side possible. Nothing less than a win will suffice for Ireland if they are to reach the semi-finals.

“We’ve had lots of tough games against France over the years and we know tomorrow evening is going to be no different,” Tierney said this afternoon. They have looked really good in their opening two games of the tournament and they’ll be coming into this game full of confidence.

“It’s a cup final tomorrow night, with a place in the Semi-Finals up for grabs, so we want the players to go out there and give it everything. It won’t be easy, but with the crowd behind them, they have the ability to claim a place in the final four.”

The French team contains seven of the pack that played against Ireland in the Six Nations game at Donnybrook in February. Loosehead prop Lise Arricaste, who started the aforementioned game which France lost 13-10, is named on the bench for Thursday game with Annalie Deshayes getting the starting jersey.

The other changes are all in the backline Yanna Rivoalen and Caroline Drouin preferred at halfback to Jade Le Pesq - the latter is among the replacements - and Camille Cabalou. Chloe Pelle is on the right wing ahead of Camille Grassineau (on the bench) while Monserrat Amedee is named at fullback ahead of Jessy Tremouliere from that game in Donnybrook.