Jack Conan aiming to take his career to a new level 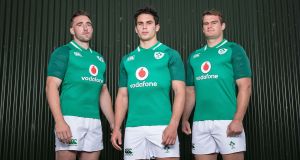 It is not so much a gauntlet being flung down as much as Jack Conan finding himself, at 25-years-old, less willing to stand still.

As a new season dawns on the back of a summer tour in which he played in all three of Ireland’s matches against the USA and Japan, he has license to feel ambitious, stretch himself.

“My own opinion is that I went pretty well in the last three Tests,” he says with caution. “I suppose that question is pretty subjective. You’d have to ask Joe [Schmidt].”

Number 8 players in Leinster and Ireland have discovered over the last decade that Jamie Heaslip has been an immovable object when fit. To the frustration of many aspirants, that has mostly been his status.

With Heaslip laid up with back problems, Conan is expected to challenge the player who was and is a mentor to him. In the curious career process, his job is to ultimately consume the player who he learned from and admires.

“It would be different if Jamie was 32 and I was 30, I’d obviously be cleaning his boots for the last 10 years,” says Conan.

“Jamie’s had a great career, still will have a great career. It’s fortunate for me that he’s on the verge of winding down– not to say that he is, because he’ll bite my head off.

“People may think: ‘Oh, Jamie’s getting old’. He’ll be right back in the frame and competing as always, I look forward to going head to head with him.”

Heaslip is 33-years-old and will be 34 in December. Even his famously robust body will begin to feel the creaks, when he returns from surgery, the first anyone can remember he has had. In itself that is astonishing for a modern player.

But over just one season it has become a vulnerability. Even when Heaslip becomes fit enough to train and compete, he will have to address the mortal side of rugby and most likely have to chase form.

Conan’s mind sees opportunity. If he can nail down the Leinster shirt now he has a platform for greater things. As any lawyer will explain, possession is nine tenths of ownership. Getting it back is often more difficult than holding on to it.

“He had a good run. It’s massively admirable,” says Conan. “He’s a great pro. That’s made a difference to the longevity of his career.

“That might be the first surgery he’s had as a professional. Last year, I had four in eight months. It just shows you. If there was a template for a good pro, it would be him in my eyes.”

Conan does not think he will feature in the pre-season friendly matches with one on Friday against English side Gloucester. But when the revamped Pro14 season begins and Europe kicks in with Montpellier, Glasgow and Exeter he wants game time.

Without madly running too far ahead, the November international series is his goal and his challenge. He’s not afraid to face them.

“I think I’ve put my hand up now and shown that I can play at that level and perform,” he says of international rugby. “I think I was consistent throughout those three Tests. But in saying that, Jamie is coming back fit now. Jordi Murphy is back as well. That’s just in Leinster, so the pressure is on. I have to put the head down and hope I get the nod in November.

Conan is now a player with four senior caps, a quadrupling of his international experience. Before the summer he had one cap.

Ireland and Schmidt will also be thinking of the next World Cup cycle for Japan in 2019, when Heaslip will be almost 36-years-old and Conan 27. But that’s too far away in the future, too early to be speculating.

“I wouldn’t say I was fortunate with Jamie’s injury midway through,” he explains. “I was able to take up that berth for the remainder of the season. In my eyes I performed pretty well. Then when Jamie is back in the mix things will be a bit different.”