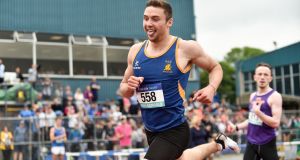 For all the advances in the science of sport and the art of coaching there remains one overriding factor in the pathway to success: choosing the right parents.

It does partly explain the rise of Aaron Sexton through the ranks of schoolboy athletics and rugby with what can be described as properly frightening speed. Only it’s not that simple; talent and pedigree is nothing without proper guidance and hard work.

At age 18, about to begin his A-level exams at Bangor Grammar School, Sexton has perhaps a final chance to leave a lasting mark on athletics when he runs at Saturday’s Irish Schools Championships in Tullamore, where last year he improved the senior boys’ 100m record to 10.52 seconds.

Already the fastest schoolboy in Irish athletics, Sexton came out earlier this month and again improved his 100m best to 10.49 when winning a sprint double at the Ulster Championships at the Antrim Forum – moving him to joint 14th on the all-time list of Ireland’s fastest men.

At the same time Sexton has been leaving a similar mark on rugby, and once his A-level exams are out of the way he’ll go full-time into the Ulster Rugby Academy.

Sexton already got his first game time for the province as a replacement against Gloucester in a pre-season friendly last August, still aged 17, and earlier this month, he was named Ulster A Player of the Year, on the back of his performances in the British and Irish Cup, where he scored seven tries.

And in getting this far he’s following in the footsteps of his father, Roger Sexton, also his coach, who likewise played schoolboy rugby at Bangor Grammar School, while setting school records in the 100m. He has a mother to thank too, naturally, but over the last year there also came one decision Sexton had to make for himself: athletics or rugby?

David Kennedy, head of physical education at Bangor Grammar School, has closely followed and influenced Sexton’s rise through both sports, and can understand why rugby was always likely to win out over athletics.

“I’ve actually been in the school now as long as Aaron, since his first year,” says Kennedy, “and even when he arrived into first year he was already head and shoulders above everybody else in terms of sporting pedigree. Just an excellent athlete, very quick, very talented, pure speed and strength, and a lovely natured guy as well.

Aaron Sexton wins Gold in the Senior Boys 100m with a New Ulster Record of 10.49 seconds

“I’ve had him at A-Level PE the last two years, taking the Bangor first 15 rugby team as well, I’ve also seen him develop his rugby skill set. But I would say his athletics, to be honest, has been a bigger influence so far.

“His father Roger held the sprint records in the school for quite a few years, before Aaron actually broke them, and also played in an Ulster schools cup final, back in his day. Roger would be very much into his athletics, and would have taken Aaron up through North Down AC.

“So Bangor, to be honest, haven’t done a significant amount with him on the athletics. He’s done most of that through Roger, who never pushed him either, but just gently cajoled him, and the two have a great relationship, and that has been the catalyst really, in terms of his athletics development.”

Indeed Sexton made his mark on athletics first, winning the gold medal over 200m at the Junior Commonwealth Games in the summer of 2017; last summer he also improved his 200m best to 21.06 seconds to qualify for the semi-final at the World Under-20 Championships in Tampere, Finland.

At 6ft4in, and weighing some 90kg, his exceptional natural speed and strength was further captured last October when, in picking up two tries against Connacht A, he accelerated to 37.8 km/hr – which according to Ulster Rugby was the fastest player speed ever recorded by an Ulster player in a match, since they started measuring such statistics in 2012/13.

Sexton also played on the Irish U-18 Schools team, and was also part of the winning European U-18 Sevens Championship squad back in September, 2017.

Kennedy believes Sexton’s desire to take both sports this far has ultimately served him well and suggests too many athletes specialise too soon. Ultimately, however, something had to give.

“To be honest, he’s been a little caught between a rock and a hard place for the last few years,” says Kennedy. “He’s done so well in athletics, at the Junior Commonwealth Games, and he loves his athletics so much, Ulster have basically said you can take part in your athletics in June and July, maybe compete in the European Under-20s, which is great for Aaron.

“But he’s looked at the long term, fallen in love with rugby, and as much as he loves athletics, realises he can probably make a career out of rugby. Maybe over the next few years, we’d like to think he will be putting on an Ulster shirt on a fairly regularly basis. He’s also going to stick with the Ireland Sevens, which I think will really help him in terms of keeping up his speed.

“It’s actually something we try to tell our students, as an all-boys school we say ‘look, you can do both’. Here’s a role model, and his athletics has probably benefitted from his rugby, and his rugby benefited from his athletics.

“I think too many kids at that age are maybe one-trick ponies, all rugby, or all hockey, or whatever, when they could be getting involved in say athletics, or badminton, or cricket. All those other activities that you can do throughout the year which can make you a better sportsman.”

Sexton has played at full back, wing, and outhalf for Bangor. Kennedy also reckons his speed and power would have been better suited to the 400m. Only that track potential may never be fully realised.

“He’s got a very bright future and it’s hard to say that kids have to choose, but at that age they do. It’s quite unusual for someone that talented to keep both sports going this long,” says Kennedy.

“ He’s been such a lively character, and deputy head boy. I’m not saying he’s an angel, but has the right chirpy-cheeky attitude, and has certainly been a pleasure to teach, a pleasure to coach, and I look forward to following his career in the years ahead.”